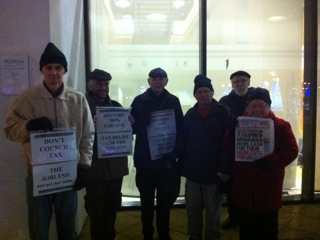 IT’S a damp Thursday evening, a small group of people are huddled in a little group outside the civic centre as Harlow Council’s cabinet meeting takes place inside. One of them, the only female of the group is holding a few copies of the Socialist Worker paper. It’s not raining but she holds them close to her chest as if to protect them from the damp in the air. The rest of the group hold laminated signs, declaring themselves the’Harlow council tax benefit rebels’. The group are quiet and polite when I introduce myself, I have agreed to come and speak to the leader Wat Tyler, a self described ‘long-term unemployed man’ and ‘victim of Harlow Council’s war on the poor’.

Tyler has been busy tweeting about the event on his twitter account, which bears the image of the 14th century revolutionary, whose name he has adopted, albeit to 46 followers. Perhaps aware of this, he is keen to explain to me why they are standing outside in mid December.

“We’re protesting the fact that Harlow Council is making people without jobs and householders pay council tax and about a quarter, 28% of local authorities are continuing not to charge council tax to jobless householders, but Harlow are charging 24% and we think this is actually unjust and unfair.”

I wonder what they can achieve here; they’re a modest group, stood carefully to the side as if conscious of obstructing the door, a peasant’s revolt it is not. Two floors up cocooned by double-glazing, Harlow Council are set to discuss the recent consultation on their reintroduction of council tax for jobless householders. The small group outside don’t even have a megaphone, and what little noise they do make, is drowned out by the speakers from the nearby Frankie and Benny’s.

“What we’re hoping to bring to the attention of the cabinet, is the fact that, the majority of people in the consultation rejected continuing with the scheme, we hope they will face public opinion and restore 100% council tax relief for jobless householders.”

Harlow Council’s consultation did in fact reveal that, 56% of the 80 people who completed their consultation on the reintroduction of council tax for jobless householders were against the scheme. The council website itself acknowledges that, “In the commentary provided to support their responses
most respondents wanted a return to a fully-funded scheme giving 100% benefit entitlement.”

Despite the consultation, the scheme is currently looks likely to continue into the next financial year. Although softly-spoken Tyler is unforgiving in his appraisal of Harlow Council’s motives, “What’s happened here is, the council have had a cut in their money, from the government, and they’re putting 100% of the cost of that on the unemployed, on the jobless, so people that aren’t working because they’re sick or disabled.”

It seems to be a particular point of contention for the group that it is a Labour council that has made this decision, “Rather than spreading the burden over the community they’re actually putting it all on jobless people, we think that’s completely unfair and it completely contradicts the idea of progressive taxation whereby those who have the most should bare the greatest burden,” he explains.

Wat Tyler and the ‘Harlow council tax benefit rebels’ can found at their blog and you can follow Wat Tyler on Twitter @WatTyler4 where he is already tweeting about the next protest on December 19th.