FRESH, homemade meals are being served up at Roydon Primary School, in Epping Road, Roydon by their in-house catering team.

Parents attended a taster session so they could see – and taste – for themselves what food their children are getting during the day.

Headteacher Gill Doyle said 120 of her 194 pupils have signed up to school meals, along with many members of staff.

She said: “The children are telling me the food is tastier, well cooked and nicely presented. As a result, take-up has increased.

“We are following guidance to provide nutritionally balanced, high quality food and use local suppliers.

“Especially at this time of the year, it is essential for our children to have a good hot meal inside them.”

A previous space issue has been resolved with the investment, thanks to fundraising by parents, in new dining tables so all children can sit together during meal times. The school’s flexible arrangements mean children can choose to have school dinners one day and take in a packed lunch the next.

Kaila Teahan, Year 6, said: “Our school has become really healthy. We have meals such as roast dinners and spaghetti bolognaise.
On Fridays, we have fish and chips as a treat, but the rest of the week is really healthy.”

Luca Frederick, Year 6, said: “There is always a salad bar and vegetables available, as well as fruit. We used to have things like chicken nuggets, but if we have them now they are homemade and so healthier. There’s a much bigger variety to choose from now.” 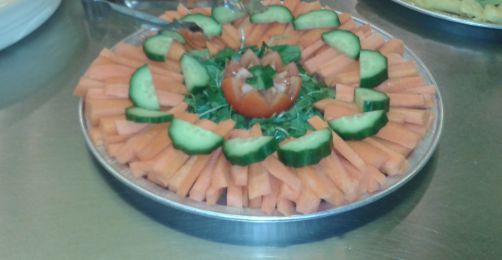 The school also now holds themed meals, with the next one planned for Easter.