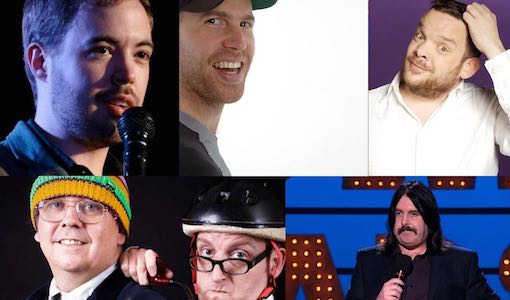 Live at the Playhouse is bringing back another phenomenal line-up of top TV comedians to the Harlow Playhouse on the 6th March 2015. The fantastic line-up includes Damian Clark, Mick Ferry, Raymond & Mr Timpkins Revue and Nick Dixon. The compere of the evening will be the brilliant Mark Olver.   With a hugely talented roster of comedians to tickle all taste buds, laughter is guaranteed. The evening includes a variety of deadpan, observational and alternative comedy, making both nights a perfect night out for all comedy fans.

Damian Clark stormed into the comedy circuit in 2012, when his uplifting and energetic stand up was an immediate hit. The Aussie boy was immediately snapped up to appear on BBC3 and Comedy Central and he continues to steadily rise.
“Hilariously surreal…well-wrought set delivered with brio and huge charm” The Scotsman

Mick Ferry is a regular at The Comedy Store, where he is renowned for having the audience in stitches with his improvisations and quick-witted gags. His popularity lead him to perform on Michael McIntyre’s Comedy Roadshow (BBCOne) as well as selling out one man shows.    “Awesome stand up” BBC

Raymond & Mr Timpkins Revue are quite possibly the craziest, silliest, strangest and double act you will ever see. After nearly 20 years on the comedy circuit, the slap-stick duo will no doubt entertain with their musical puns, cheeky games and unique style. “A mad, anarchic triumph of stupidity over style. Not to be missed” The Guardian

Nick Dixon’s intelligent, sharp and well-crafted comedy led him to reach the final of Leicester Square New Comedian of the Year after just three months performing stand up. He has gone from strength to strength
since and is surely one to watch. “Delightfully offbeat turn of phrase…elegantly constructed writing”