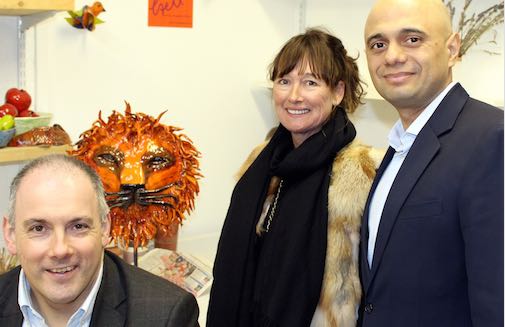 LAST Saturday the Secretary of State for Culture, Media and Sport, Sajid Javid MP, went on a tour of the Gibberd Gallery and Parndon Mill.

He was shown around Gibberd Gallery by the gallery’s director, Corinna Dunlea. Mr Javid saw the latest exhibition and was told about the history of the gallery. Later on he went to Parndon Mill where he met artists from several of the studios housed there. Hosted by MP for Harlow Robert Halfon and Curator & owner Sally Anderson, the Secretary of State was able to witness the fine arts of painting, print making & sculpture together with the crafts of ceramics, metalwork, textiles and glass blowing, alongside product design, graphic design and architecture.

Among others, he met Angelika Hinton, a ceramic artist from which the Secretary of State bought an apple bowl as a present for his mother. Harlow MP Robert Halfon was particularly keen for the Secretary of State to see the work of Ms Hinton as he is a fan of the beautiful, colourful ceramic lions she creates, one of which he keeps in his House of Commons office.

The Secretary of State said “It is a wonderful day to visit Harlow. This town is a cultural bastion in the East of England. Both the Gibberd Gallery and Parndon Mill are great examples of grass roots and community art”.

Harlow MP Robert Halfon said “I am very proud of Harlow’s art and culture. In fact I have described it as cultural oasis of the East of England in the House of Commons (Hansard http://www.publications.parliament.uk/pa/cm201415/cmhansrd/cm150115/debtext/150115-0001.htm#15011554000656). Sajid Javid saw some of the best art here today and examples of why Harlow is one of the best towns in Britain. I thank the Project Director Roger Lee, curator Sally Anderson and Gibberd Gallery Director Corrina Dunlea for showcasing the best of Harlow”.

Mr Roger Lee and Ms Sally Anderson, Project Director and Curator at Parndon Mill respectively, said “Parndon Mill hub of creativity was honoured by a visit from Sajid Javid, Secretary of State for Culture, Media & Sport on Saturday afternoon. Here he was able experience the front line of the arts and engage with a vast array of creative fine artists, craftsmen and designers. Parndon Mill is unique in the diversity of creative skills housed on one site which offers opportunity for collaboration & skill sharing. It is a tall order to fully experience all that Parndon Mill has to offer in a brief 1 hour visit but Sajid found his overview interesting and enjoyable and we hope that he will return for our Open Studios weekend in July when all 30 studios are open to the public. http://www.parndonmill.co.uk/open_studios.html “

Gibberd Gallery Director Corrina Dunlea said “It’s really important for Harlow to sustain, continually inspire and attract visitors with its cultural heritage. The town possesses two major art collections and previous funding has enabled Harlow Art Trust to host outstanding exhibitions related to these. We were delighted that Sajid Javid our Minister for Culture took the time to visit us and heard how important arts & culture is to Harlow’s community and integral to our economic growth.”