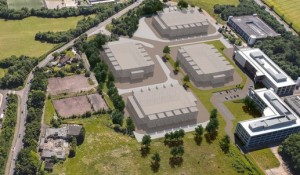 TWO international companies are helping to further cement Harlow’s position as an excellent location for businesses by expanding their operations at the Harlow Enterprise Zone London Road site.

Following the recent announcement that Public Health England is to establish its national science hub in the town, the confirmation that two major businesses are to expand their presence in Harlow is further good news for Harlow and for the development of the Enterprise Zone. Technology and innovation business Raytheon and electronics company Arrow have both signed 15-year lease agreements to take space at Kao Park (the London Road South campus of the Enterprise Zone).

Raytheon is to move from its current location in The Pinnacles and bring its entire UK Research and Development (R&D) department to the Enterprise Zone as part of a £25million long-term investment to create its new UK Technical Centre of Excellence. Having scaled down its presence in Harlow in recent years, with the re-location of manufacturing operations to Scotland, this will represent a significant expansion with jobs in Harlow growing from around 350 to around 500.

Richard Daniel, chief executive, Raytheon UK, said: “This announcement marks a new era for Raytheon in Harlow, where the company has significantly contributed to the economy for more than 50 years. The new facility gives us tremendous potential and will become our main technology centre in the United Kingdom for the design and development of some of the UK’s most advanced defence capabilities.”

Arrow Electronics is a global provider of products, services and solutions to industrial and commercial users of electronic components and enterprise computing solutions. Arrow is already situated on the site but is moving its operations to newer and larger premises, taking about twice its current space. With residents of Harlow comprising more than half the company’s workforce in the town, this is excellent news for local people.

Paul Nelson, vice president global real estate, Arrow Electronics said: “Arrow Electronics has a successful history of operations in Harlow which stretches back more than 40 years. Today Arrow Electronics employs 250 people in Harlow providing innovative services and solutions to electronics customers and suppliers in the UK and across Europe. The move to the new office will provide an excellent working environment for our business and talent to develop and grow.”

Work started on the London Road south site in December 2014 with demolitions, putting in an upgraded power supply and refurbishing existing buildings. This latest development will mean new potential for opportunities for employment and skills development for local people.

On Wednesday 30 September 2015 Robert Halfon MP, deputising for the Secretary of State for Business, Sajid Javid, will also formally mark the opening of a new access road to the site. This week’s completion of the new road is the first stage of the development of a new business park on the site and will provide a dedicated entrance for Raytheon, Arrow Electronics and other future tenants.

Kao Park at the London Road South site (being developed by Goldacre Ventures), is the former home of Nortel and where the technology behind fibre optic cable was developed in 1966, offers 20,000 square metres of office space as well as a data centre development. 65 per cent of the office space is now already pre-let through Arrow and Raytheon. The data centres will offer independent and world-class data capacity for local, national and international companies and organisations of all shapes and sizes with construction of these starting in early 2016.

Councillor Tony Durcan, Portfolio Holder for Regeneration and Enterprise, said: “This is fantastic news for the Enterprise Zone, for Harlow as a whole, for Essex and for the whole of the UK in terms of inward investment. The fact that these two major international companies want to expand their UK operations in Harlow shows what a great place Harlow is to do business and the huge potential that is being fulfilled at the EZ.

“The Harlow EZ is quickly taking shape and is a highly attractive proposition to businesses in the advanced manufacturing and engineering, Med Tech, life sciences and ICT (Information and Communications Technology) industries and we hope that many more organisations will follow in the footsteps of Raytheon and Arrow.

“In addition, the opportunities for new job creation and skills development are really exciting for the local community and something which is a big priority for the Council.”