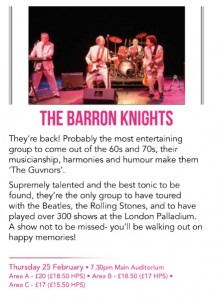 THEY first came to fame in 1964 with the number “Call Up the Groups” (Parts 1 and 2). It overcame copyright restrictions and parodied a number of the leading pop groups of the time including the Searchers, Freddie and the Dreamers, the Dave Clark Five, the Bachelors, the Rolling Stones, and the Beatles. The song imagined the various artists singing about being conscripted, or “called up” into the British Army, although actual conscription had ended in 1960. The single climbed to number 3 in the UK Singles Chart.[4] As an example, the song “Bits and Pieces” by The Dave Clark Five was parodied as “Boots and Blisters”. They then followed this parody theme with two more hit singles “Pop Go the Workers” (1965) and “Merrie Gentle Pops” (1966), while continuing to work the cabaret circuit, as they do internationally to this day.