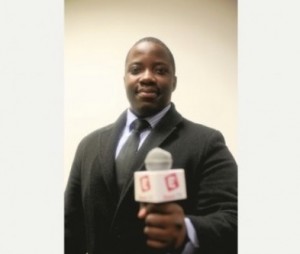 The statement from chief executive, Tim Tiernan said: “The EssexTV and EssexMagazine board has terminated Matthew Martino (Mathetes Chihwai’s) directorship of both companies and he yesterday agreed a severance deal and sold all his shareholding back to myself and Mr Alin Stacescu (our Creative Director)

We are absolutely horrified and shocked beyond belief by the decision by Mr Martino’s trust to have any degree of association with Tommy Robinson. We are now conducting an internal review into how much “in kind” favours Mr Martino offered to Mr Robinson and if any of our staff were involved.

Mr Martino has issued a statement

He said: “I am obviously very disappointed to be parting ways with the company. I feel this decsion has been made prematurely whilst the full facts were yet to be established.

However, I respect the boards’s decision. I have utmost respect for all the directors, staff, volunteers and team I have served with over the past two years and I wish them all the very best. I will continue to support the company and attend events and promote them where I can”.

Mr Martino seems to have maintained his close ties to Mr Robinson.

In a Twitter exchange, Mr Martino told him they had to close their Nottingham office as they had “visitors making a scene”.

We asked a Nottingham-based journalist to pop into HQ. Woman in reception had never heard of MMBF and said they did not have a physical office and was certainly not aware of any protest. However, many organisations have virtual offices there.