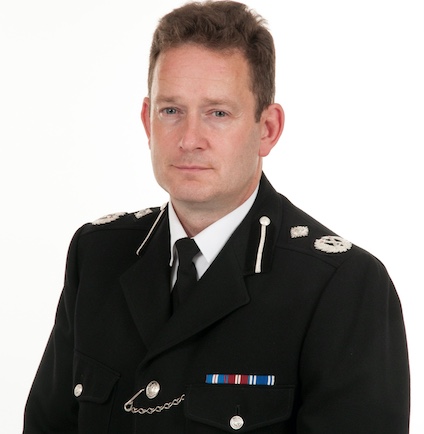 Ben-Julian (BJ) Harrington has been selected as the proposed candidate to be the next Chief Constable of Essex Police following an “open and rigorous recruitment process”.

The appointment is subject to a confirmation hearing by the Police, Fire and Crime Panel which will meet on June 28 to scrutinise the process.
Roger Hirst, Police, Fire and Crime Commissioner for Essex, said: “Following a rigorous and transparent recruitment process, I’m pleased to announce Mr Harrington as my proposed candidate for the role of Chief Constable of Essex Police. Mr Harrington will bring a wealth of experience to the role and has made a significant impact since joining Essex Police as Temporary Deputy Chief Constable in April 2017.

“Mr Harrington is an outstanding leader who comes to this role with over 27 years of operational experience both in Essex and in the Metropolitan Police Service. During the interview process Mr Harrington clearly demonstrated his leadership and his strong commitment to Essex Police.”

Ben-Julian Harrington said: “It’s an absolute privilege to be named the preferred candidate to lead a force full of energetic and talented people doing the most difficult of jobs. In the fourteen months I have spent in the county I have seen up close the challenges officers, staff and volunteers face and the frustrations our communities feel. But above all what I see is a determination to do the best we all can to keep our county as safe as possible.

“My job will be to tackle violent crime whether its roots are in domestic violence or drug dealing, build on already strong relationships with community safety partners in Essex and our vital partnership with Kent Police, and make sure the people who put themselves in harm’s way every day to protect the public are themselves protected.”

Mr Hirst added: “Essex Police has come a long way over the last few years and this has been reflected by the independent inspections carried out by Her Majesty’s Inspectorate of Constabulary and Fire and Rescue Services, the confidence of officers and the relationships they have with their local communities.

“Mr Harrington has made a significant contribution to this improvement and I am confident he will continue to deliver improvements for the people of Essex.

The recruitment process involved written exercises, media tests, psychometric testing and meetings with key stakeholders as well as an interview with an independent panel. The panel included Roger Hirst, the Police, Fire and Crime Commissioner, the Director General of the National Crime Agency, Lynne Owens, the Chief Executive of Thurrock Council, Lyn Carpenter, the Chief Executive of Essex County Council, Gavin Jones and the Chair of Safer Essex, Ian Davidson.