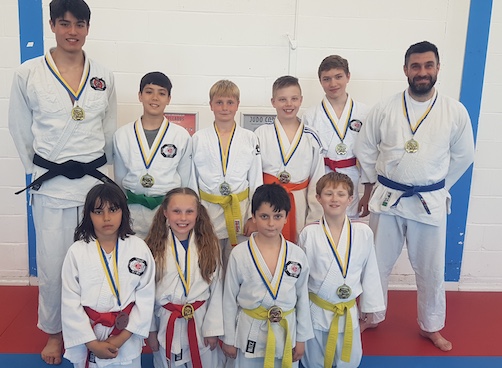 A TEAM of mixed grade Harlow Judo Club players ranging from juniors to seniors, travelled to Thetford to take part in the East Anglian Fours competition.  For one of the players, it was her first competition and to put into practice all the training she had received.  The team was split into 6 pre-arranged groups according to age, grade and weight and in this particular competition, and had no more than 3 fights per group.

In group 1 (years 2007-2010), a Gold medal was claimed by Millie Morgan (9), a Silver medal went to Eli Balski (8) and Bronze medals went to Jack Loft (9) and Lydia Herod (8) who took part in her first competition since turning 8 very recently.

In group 4, the Club was represented by Robert Morgan (over 30 years of age to 2nd Kyu (blue belt)) and he also took a Gold medal.

In group 5, (senior licence, brown belt and above) and the last player to represent the Club, was Thomas Lambert (16) who helped claim the Club’s 6th Gold medal.

Senior Coach Mick Ellis, who was also assisted by Thomas Lambert, said “I am very pleased with the team’s overall performance today – for one player, Lydia, it was her very first competition since turning 8 and she tried extremely hard.  In fact, the whole team all fought really well and did their best today – well done to them”.

Harlow Judo Club also caters for those with special needs – please contact the Club for more details.  They are based in Foldcroft, Harlow, CM20 1SE. For training times, please visit www.harlowjudoclub.com or contact Gill Ellis on [email protected] or 07976 955905 for further information.