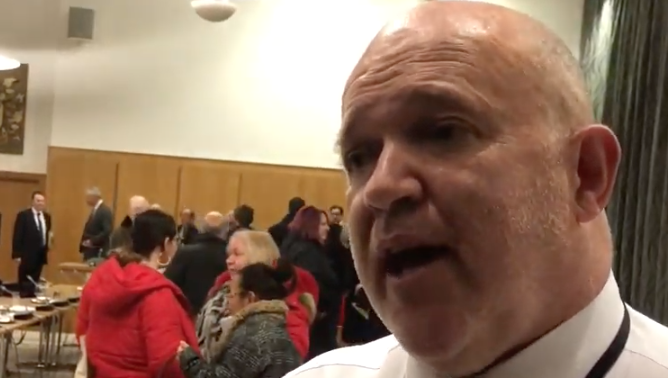 AT last Thursday’s meeting of full council, Labour leader Mark Ingall presented the 2019-20 Council Budget to members. In presenting it for debate, he said that, “against an uncertain national economic outlook and with Tory government cuts continuing to bite, it offered residents much needed certainty and peace of mind.”

Councillor Ingall said; “With just weeks to go before Brexit and with the Government still arguing with itself, there is no deal in sight adding to the uncertainty.

Recent letters received by me from the Secretary of State for Housing, Communities and Local Government confirms that chaos, panic and ‘shifting the buck’ is the current state of play in Westminster.”

Councillor Ingall said that despite this government’s failings bearing down hard on Local Authorities, there was considerable good news in this budget for the residents of Harlow.

Key points of the Council’s 2019-20 Budget include
No redundancies and the full nationally agreed pay rise will be implemented for all Council staff
The creation of 11 new apprenticeships paid at the Living Wage of £9 an hour
Funding will continue to be provided for Harlow Carnival, Bonfire night and the fireworks display and Christmas lights in the town centre.
Long term funding is secured for Pets’ Corner, The Playhouse and the Community Safety Team
A one percent rent reduction for Council tenants which will be met while continuing to protect housing services and making plans to build more Council housing
Increased funding to prevent homelessness which has risen by 163% nationally
The first increase in Councillor Allowances in eight years following the recommendations of an independent panel.

The Budget was overwhelmingly passed following a vote by Members.

Councillor Ingall said; “That all of this has been achieved, despite the national picture, with a below inflation increase of 2% in Harlow’s portion of Council Tax – representing an increase of just 9p per week for a Band C Council Tax payer – is a testament to Harlow Council’s sound financial planning, efficient management of income and expenditure. 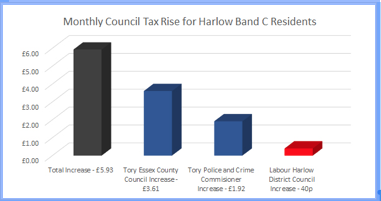 “It also reflects the benefits accruing to the Council from our decision to create a local authority trading company HTS, tasked with delivering environmental and housing services and returning revenue to Harlow for reinvestment in our town.

“And let’s remember that of the money Harlow collects in Council Tax, only 17p in every pound is retained in Harlow, the other 83p goes to the Tories at Essex County Council. While our portion will increase by just 2%, the portion of Council Tax collected by the County Council is set to increase significantly more.”

Currently Essex County Council is proposing a 4% increase in its portion of Council Tax which will equate to £3.61 a month for band C Harlow Council Tax payers.

The Essex Police, Fire and Crime Commissioner is planning the maximum possible increase in the tax he takes from Harlow residents and this will equate to a further £1.92 per month from a band C Council Tax payer.

Councillor Ingall said; “That’s £5.53 per month more that Harlow residents will pay the Tories in Essex while our increase here in Harlow is just 40p. And still they plan to close three of our libraries, leave our roads in a parlous state and fail to reinstate acceptable levels of policing on our streets.

“By contrast this Labour administration offers sound financial management, efficiency savings where they can be made, decent pay, job opportunities and security, cultural and recreational opportunities, investment in new Council Housing, investment in developing business opportunities, all afforded with a below inflation increase in Band C Council Tax of 9p per household per week.”