HARLOW athletes enjoyed a successful weekend at two county events on athletics’ County Championship weekend. At Chelmsford, in the Essex Championships there was good representation across all ages:

At a senior level Shemar Boldiszar was in 100m action and was looking for a time that would peak the interest of national selectors. In his heat he ran 10.66 to reach the final. He won the final in 10.61 and heads of to the Loughborough international selection fixture in fine form.

Marley Sarling made the 100m final for the U17 age group and, whilst not achieving a medal, reduced his PB to 11.3s.

Harry Woodall made the 400m final and was fifth. In the same event at U20 and U17 level were Teale Cunningham and James Petty. Both made the finals and were fifth respectively. 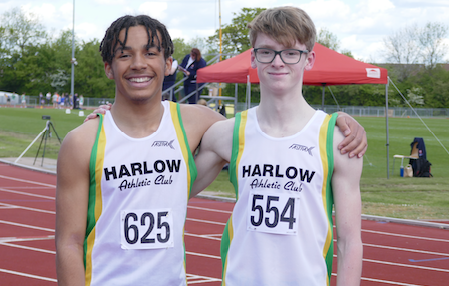 There were other good hurdle performances in the age groups: Grace Iyinbor smashed her PB and reduced it to 12.5s for the U17 80m distance; Millie Upton was just outside her PB in 13.66; Regan Lawrence ran his first championship U17 110m hurdles and was fifth in a new PB time of 15.61s. And Mia Rowan reached the final of the U15 75m hurdles, an excellent achievement for a first year in the age group. Her time of 12.55s is a new PB. 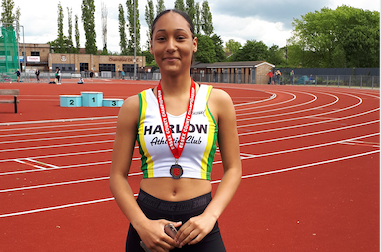 However, it is not just on the track that Harlow can look for success and there were some good field performances: Abi Dawson in her first year at U15 showed potential as she reached 1.40m in the High Jump. Her jump was the same as the third placed athlete but countback showed she had taken more attempts to achieve the height. It was all the more impressive as the conditions were appalling. 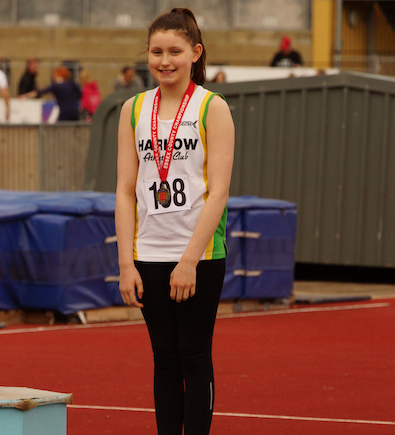 Grace Iyinbor returned to pick up U17 bronze in the long jump with a jump of 4.62m. Millie Upton, in only her third competition for triple jump was fifth with a jump of 9.57m. Regan Lawrence was also fifth in his triple jump. And in a one man U20 ‘jumpathon’ Leo Chaschin returned three golds and a bronze at U20 level. He achieved gold in high jump, pole vault and long jump and his bronze came in the triple jump.

In the Javelin, Marley Sarling achieved bronze with a throw of 43.74m. Ellie Marklew threw a new PB in the U15 competition of 24.66m her day concluded with a PB throw of 7.74m for fifth in the U15 shot. Sophie Brennan took U13 bronze also in a new PB distance of 19.27. Amazingly she threw the exact same distance twice in the competition!

There was more good news for Harlow athletes at the Hertfordshire championship, held at Watford. Freddie Henderson made both U17 finals for 100m and 200m respectively. He was fourth in the 100m in a new PB time of 11.9s. He went one better in the 200m taking nearly a full second off his PB in the process. He has now achieved his personal goal of going under 25 seconds, 24.4, and has more than half a season to reduce it further.

Annalyse Hassanally completed the good news as she threw the discus 17.74m to take the county bronze medal.

Harlow remains a small team in competitive circles and can reflect upon a strong performance across age groups and training groups. The club should certainly be looking to capitalise on the success of the weekend as it showed that the potential is there to grow into something special in years to come.