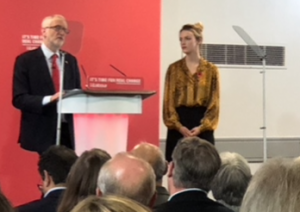 A POLITICAL storm is brewing on comments made by Harlow Labour candidate Laura McAlpine’s close adviser and her response to those remarks.

YH reported on the comments made by Brett Hawksbee, back in September 2018.

Mr Hawksbee is credited as the strategist behind Ms MacAlpine’s general election campaign including deft use of social media and the tagline LoveHarlow.

On Monday, Mr Hawkswbee was pictured by the world’s media seated a few places along from Jeremy Corbyn at a rally held in Harlow.

This triggered an article in the Jewish News.TimesofIsrael which referred to the controversy in 2018 when Mr Hawksbee referred to a “Jewish Final Solution” in a personal blog. The article also made reference to Mr Hawksbee’s apology.

Today (Friday) they have run an exclusive story which claims that Ms McAlpine defended the ‘Jewish final solution’ slur.

The article can be found here

The articles come in a week when all the Jewish newspapers in the UK have written of the concerns of the Jewish community of a Jeremy Corbyn-led government.

Since they published the article, a number of people have commented on there articles.

The chair of the Holocaust Educational Trust, Karen Pollock said: “You have to be able to say what is right and what is wrong – you’re standing for public office. For shame”.

“They have no place in a progressive, anti-racist party. But it begs question: why does he (& many others) think Lab is his natural political home?