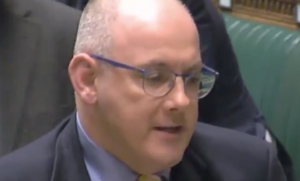 HARLOW MP Robert Halfon returned to the House of Commons for the first time after winning an historic fourth victory in the General Election.

Each MP has to enter the chamber and be sworn in before the new parliamentary session begins.

Mr Halfon will be keen to see if he can be re-elected chairmanship of education committee. That vote will cone in the New Year.

Officially the MP for Harlow and the villages. A true honour. pic.twitter.com/kuPFtIkXDP