MP Robert Halfon tells House of Commons: “In Harlow, these ghettos, places like Terminus House and Templefields should be closed down, once and for all”. 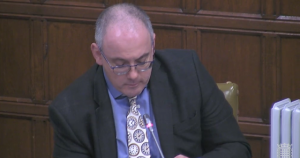 HARLOW MP Robert Halfon has made a major speech in the House of Commons on office block conversions in Harlow. In a detailed speech, Mr Halfon pulls no punches as he states:

“In Harlow, these ghettos – places like Terminus House and Templefields – should be closed down, once and for all”.

At the end of the debate, Mr Halfon re-inforced his point to the minister by stating that action must be taken to close down the office blocks in Harlow.

His speech at the Westminster Hall Debate is as follows.

“It is a pleasure to serve under your chairmanship –

Today, I would like to talk about a pressing and ongoing issue in my constituency of Harlow in, what can only be described as, “human warehousing” and “social cleansing” under the expanded permitted development rights legislation.

Let me be very clear. I believe in more housing. We face a crisis in this country. 1.2 million people are on the waiting list for social housing. Over 682,000 people are living in overcrowded accommodation.

All this, and yet studies by Sheffield University show that 94% of land in the UK is not built on. Housing consultant, Colin Wiles, even suggested that English golf courses occupy more land than homes in this country.

I’m pleased this Government is accelerating our house-building programme, with 1.3 million homes delivered since 2010.

My own constituency of Harlow is set to benefit from 16,500 new homes by 2033 from the Harlow and Gilston Garden Town alone.

I agree, in principle, with the motivation behind expanding permitted development rights legislation: to make it easier for new housing to be built.

I’ve even seen how permitted development rights can be a success-story in Harlow.

Edinburgh House, formerly home to Pearson publishers, has been converted into quality apartments by Land Charter Homes – close to the station and with good transport links.

But, as BBC Panorama’s documentary detailed last week, permitted development rights have been an unmitigated disaster for our town. The reasons for this, which I will set out, are three-fold:

First, Harlow has become a prime location for these developments, with 12 former office-block conversions, including Terminus House, Templefields and Redstone House. Harlow’s proximity to London, and comparatively lower property prices, makes it a preferred location for developers.

But, of course, the nature of the legislation does not require the builds to comply with local planning regulations. And, as such, around 1,100 units have been created in Harlow – a town of around 40,000 homes – none of which have been tested against the requirements of the Local Plan.

Second, and perhaps most importantly, the creation en masse of new, relatively inexpensive accomodation in Harlow has made these properties an attractive option for Councils looking to house individuals who have presented as homeless in their own areas.

This has allowed, predominantly, London Labour-led Councils to “socially cleanse” their boroughs and place vulnerable individuals, often with additional needs, into these converted properties as temporary accommodation.

A Freedom of Information request I carried out in July 2019 found that 32 Labour Councils have made out-of-area placements. In Harlow, we have had an influx, receiving placements from Barking and Dagenham, Enfield and Harrow, to name just a few.

The placing authority does not notify Harlow Council, nor do they offer any additional funding to cope with the increased demand on local services.

In Harlow, however, this situation has been exacerbated by the fact that the Labour Council did not choose to take up the full capacity of Terminus House, when it was initially offered to them by Caridon Property Group to house Harlow residents in need of accommodation.

We might well ask, if Harlow Council had accepted this offer, the Council could have worked with the landlords to ensure this was good quality housing.

But as such, Caridon offered the remaining units up for rent to other authorities, causing the increase in placements of individuals from other areas.

Third, the impact of this influx on Harlow has been catastrophic. The “rabbit-hutch” housing developments have become a hive of criminal activity and drug-abuse, placing huge pressures on our local police, A&E and social services.

Panorama’s investigation found that Essex Police have been called to one site, Templefields, nearly 600 times in three years. And it is the Harlow tax-payer bearing the brunt.

Our local schools are also under immense pressure. One primary school, Tany’s Dell, looks after pupils from 20 families currently living in nearby temporary accommodation at Templefields House. The teachers have described issues relating to safeguarding, poor attendance, anxiety and even exhaustion from the 30-minute walk to school, some of whom are as young as just 3-years-old.

I believe passionately that it is my duty in Parliament to address social injustice. I am not blaming these individuals and families; they are taken away from their usual support networks, friends and family.

Often, these properties are developed in areas never intended for residential dwelling. They are placed in isolated employment areas of the town with poor public transport routes, making it difficult for residents to integrate socially and economically into the community.

That is why, it is so important that Councils have at least some role to play in determining where these conversions take place.

These individuals arrive, unfamiliar with social and counselling services and schools and can feel unsupported in the new area. If families are not deemed vulnerable at the time of placement, it’s very easy for their difficult, new living situation to affect this.

In my constituency surgeries, when I am out and about in the town, I have heard moving stories from families living in these human warehouses.

One lady, a recovering drug addict, was placed on a corridor where other residents were taking drugs, right in front of her.

I ask the Minister, how can we expect this young lady, and so many others alike, to get her life back on track in an unhealthy environment like this?

There is no question that ongoing support following placement is necessary if families are to thrive in their new area.

But, does the Minister not agree that in order to provide support, Councils must first be notified of their placement and be given the funding to provide this care through local services?

Permitted development rights were never meant to be about building ghettos. Nor were they about living space, letting Councils ship people off like cattle to the East.

I made it clear at the beginning of my speech: I know we need more housing and I recognise that permitted development rights have made an important contribution to delivering this.

But, there have to be rules – particularly around quality. And Councils must have some say as to how these office-blocks are converted.

As one resident said to me, these buildings were built for paper not people. If we truly want to help people, homes must be just that – quality, safe spaces – not tiny box rooms housing small families on the same corridor as drug users and violent individuals.

In January, the Secretary of State confirmed to me in the Chamber that the review into permitted development rights

“will be taking forward any reforms necessary”

“all properties built in this country need to be safe”.

BBC Panorama documented cases where Councils are housing individuals, couples and families in single rooms. Kitchens and toilets are just metres apart. This is not a healthy living environment. Shelter estimates that poor housing costs the NHS £1.4bn a year.

So, I ask the Minister, in the Department’s review into Permitted Development rights, will he/she be sure to look beyond the numbers and consider the quality of housing being built?

And, will he/she work with colleagues to reform the current legislation and make it a requirement in law that all properties, be they for temporary accomodation or not, meet minimum national space standards?

According to the House of Commons Library, local authorities have

“had powers to restrict permitted development rights under an Article 4 direction at least since the Town and Country Planning (General Permitted Development) Order [of] 1995”.

Welcome changes made in 2010 mean

“it is now for [Local Planning Authorities] to confirm all Article 4 directions”, making it easier for Councils to invoke restrictions on permitted development rights.

Yet, in Harlow, the Labour Council has failed to act. Only in March last year did they seek an Article 4 direction in certain areas of the town.

This issue has been ongoing for years.

But, there is another factor to this.

The House of Commons library confirmed to me that,

“residential premises created from office conversions under permitted development which add to an authority’s council tax base… count for the purpose of the New Homes Bonus payments” received by local councils.

There is very little financial incentive, therefore, to take action to restrict them.

This is particularly so in Harlow where the New Homes Bonus created a grant back to the Council worth more than £1 million in 2018/19. With over half of new properties last year being office conversions, Harlow Council should be doing more to use this money to help individuals and provide security around the town.

What’s more, sections 76 to 93 of the Anti-social Behaviour, Crime and Policing Act 2014 grant powers to the Council to seek a Closure Order for a property on grounds of either:

Disorderly, offensive or criminal behaviour;
Serious nuisance to the public; or
Disorder near the premises.

But this Order is not a permanent solution. It lasts 6 months.

And other local authority closure powers are substantially limited in their scope, for example, to deal with narrow environmental concerns.

Councils need stronger powers to take meaningful action against permitted development right conversions, where they are creating issues for the town.

Having said that, I do think the Councils should do more to use the powers that are available to them.

In Harlow, these ghettos – places like Terminus House and Templefields – should be closed down, once and for all.

Will the Minister ensure that the review will provide stronger solutions to allow Councils to deal with the issues that permitted development rights have created and exist now?

The current state of permitted development rights legislation raises a number of issues:

Councils are taking advantage of cheap converted office-blocks to ship people off to the East. Individuals with additional needs, that require support from their local authority, are being dumped in shoddy, rabbit-hutch housing, with the receiving authority having to pick up the pieces.

There is no sense of any duty of care for these individuals. There is no notification and no extra funding granted to the receiving authority to provide resources.

And, it is disproportionately affecting certain parts of the country – areas like Harlow, where the pressure on the taxpayer, local services and schools is enormous.

Vulnerable individuals are housed together, in isolated areas, away from their support networks, creating a breeding ground for criminal and anti-social behaviour. Those that are really trying to get their lives back on track, must do battle with an unhealthy living environment, every day.

We are let down by Councils.

We are let down by poor legislation that seems to support quantity over quality housing.

We are let down by the planning guidelines which should give more powers to stop unsuitable accommodation in certain areas.

And, we are let down by the fact that when these vulnerable families come through, there is no extra funding.

MP Robert Halfon tells House of Commons: “In Harlow, these ghettos, places like Terminus House and Templefields should be closed down, once and for all”. added by Staff Reporter on February 13, 2020
View all posts by Staff Reporter →

6 Responses to "MP Robert Halfon tells House of Commons: “In Harlow, these ghettos, places like Terminus House and Templefields should be closed down, once and for all”."