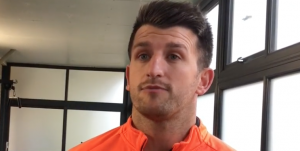 WHILST the Coronavirus (COVID-19) pandemic has disrupted and ended the 2019/20 Rugby season we do still have to plan for next season; we need to stay positive and make provision for when we can all start training and playing again. To that extent I have two important announcements to make.

Harlow Rugby Club announce today that Senior Head Coach Tom Hughes has decided to step down. Tom has held the position for the past two seasons with the 1st XV currently sitting in 2nd position (with a game in hand) of London 3 Essex with 5 games to play; they have reached the final of the Essex Intermediate Cup before the season was abruptly ended.

Chairman Paul Tucker said: said. “I want to thank Tom for guiding us through the last two seasons. He stepped up at short notice and has helped us build some good foundations with a renewed sense of purpose and professionalism.”

With immediate effect, Michael Weston has been appointed as Senior Head coach. Michael, a former player and Assistant Coach for the past two seasons is perfectly placed to step-up and take over the responsibilities of Senior Head Coach; a very solid candidate and held in high regard amongst the senior squad.

Paul Tucker added. “We’re delighted to promote Michael to Senior Head Coach. He knows our expectations and those of our members are high and we are confident he can play a lead role in taking the club back to the levels we all want.”

Tom Hughes said. “It has been an absolute pleasure to be able to coach Harlow Rugby Club over the last two seasons. My aim coming in was to support the vision of the club and to create a professional approach to amateur rugby; achieving this through hard work, enthusiasm and having fun. This season has seen the development of a team who are playing some absolutely fantastic rugby; dynamic, powerful and brutal at times, this group of players are very talented and capable of achieving a lot in the coming years.

I would like to thank the club and the supporters for their support and patience over the past two seasons; even when times were hard they have supported the vision of the coaching team and given every everything they had to help us achieve our desired goals. Special thanks goes to Tux for always being there; it is hard coming into a club as an ‘outsider’ but Tux has been there every step of the way with support and guidance.

Thanks goes to Luke (Bowering) for being a fantastic captain over the past two seasons, always the coaches voice on the field but more importantly leading by example even if it means pushing himself to breaking point. And finally thanks goes to the players; they have worked incredibly hard on and off the field, supporting each other as team mates and friends and having developed a winning mindset that is only going to drive the club even further forward.

Biggest thanks and congratulations goes to Westy, I know I am leaving the next steps of the club’s journey in very safe hands. During my time at the club Westy has been the best assistant coach I have ever worked with. Westy is hard working, knowledgeable and, most importantly, determined to see success at Harlow Rugby Club. I know players and supporters will buy into his vision and give him every bit of support and encouragement.

Thanks again to everyone and hopefully I will be invited to a lunch or two to see the club taking bigger steps forward in the future. #REDMEN ”

Michael said. “It is an honour and privilege to have been chosen to take over as Senior Head Coach at Harlow Rugby Club. Having been with the Club since I was 13 years old I feel extremely proud to be trusted with this position.

It was thanks to the training and support I received at Harlow that I was able to realise an opportunity to play at a semi-professional level, it was always my ambition to come back home and give something back to my club. I now hope to use my experiences in the semi-professional game and as a personal trainer to help the club progress to the next level.

I want to thank Tom for all the hard work he has put in over the past two years, helping to build the team and leaving it in an incredibly strong position.

I have been working with this group of players since 2015 and am genuinely excited to take this group to the next level and build upon the excellent work achieved over the last few seasons.

“My standards are high, I want to see this team maximise their potential, I will bring a structured and systematic approach to the club and monitor player(s) progression. I’ve already set clear objectives with the club to fulfil our potential and ambitions.

“I can’t wait to get started, I’m excited to face the challenges ahead.”

Michael’s coaching team will be announced as soon as possible.