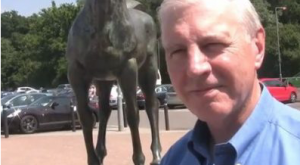 CHURCH Langley Councillor, Tony Hall, has resigned with immediate effect owing to ill health. Cllr Hall has represented the Church Langley ward since 2002 and was Chairman of Harlow Council in both 2008/9 and 2015/16.

Harlow’s MP, Robert Halfon, and the leader of Harlow Conservatives, Cllr Andrew Johnson, have paid tribute to Cllr Hall’s many years of service.

Mr Halfon said: “I first met Cllr Hall in 1999 and he has served our community in both his professional career and as a local councillor.

“I do not know a more dedicated public servant and I want to thank Cllr Hall for the help he has given me and so many residents over many years. I pay tribute to Cllr Hall and I wish him as good health as is possible at the moment.”

Cllr Andrew Johnson said: “I’ve had the pleasure of working with Cllr Hall for a very long time and would like to thank him for everything he has done for our community. He has been a brilliant representative and hard-working local councillor.

“I would like to wish him every good health and commend him for his distinguished service.”

Brian Keane, Chief Executive, said: “Councillor Tony Hall has informed me that he has resigned with immediate effect. Tony had been a Councillor since 2002 and had been Chair of the Council twice, in 2008/09 and 2015/16. I would like to place on record my thanks to Tony for his long service to the Council and to Harlow.”

Under Section 5 of the Local Government and Police and Crime Commissioner (Coronavirus) (Postponement of Elections and Referendums) (England and Wales) Regulations 2020 the vacancy in Church Langley Ward will be filled on 6 May 2021.

3 Responses to "Church Langley councillor resigns due to poor health"