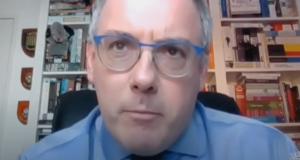 ON MONDAY night, Robert Halfon MP voted with cross-party MPs to pass the Government’s landmark Domestic Abuse Bill. The legislation seeks to strengthen protections for victims of domestic violence and ensure stronger measures can be taken against perpetrators.

The provisions of the Bill will guarantee that survivors fleeing domestic violence are given priority access to local housing services and has toughened up on defences available to perpetrators, including the removal of the rough-sex defence.

Mr Halfon, MP for Harlow, has long been campaigning for legislative change for victims of domestic abuse. Following a virtual MP surgery meeting with Harlow resident and survivor of domestic abuse, Ms Charlotte Budd, Mr Halfon is advocating for changes to the UK’s family court system and stronger protections against stalking. Last night, Mr Halfon backed an amendment which sought to toughen up measures that can be taken against stalkers and perpetrators of domestic violence.

Ms Charlotte Budd has outlined her concerns about the treatment of victims of domestic abuse within the family court system. Together with Mr Halfon’s support, she is advocating for greater education and guidance for judges to be able to assess domestic abuse cases in the correct manner.

Last week, Mr Halfon took the matter to Leader of the House of Commons, Jacob Rees-Mogg MP, in a Parliamentary question in which he asked for a statement on the Government’s action to improve the treatment of domestic abuse victims in the judicial process. He explained:

“My constituent Charlotte Budd suffered unnecessary, unacceptable and avoidable trauma both as a victim of stalking and through her experience in the family court system. Will the Leader of the House ask the Home Office what steps are being taken to ensure that the correct guidance and education is in place for members of our judiciary when dealing with domestic abuse cases, such as that of my constituent?”

In his response, Mr Rees-Mogg said:

“The constituents of Harlow are lucky to have him as such a champion fighting their causes and taking up their grievances.”

He affirmed that “tackling domestic abuse is one of the Government’s highest priorities” and that:

“The [Ministry of Justice] is overhauling the family courts following an expert-led review into how they handle domestic abuse that raised concerns that victims and children were being put at unnecessary risk.

“Furthermore, new stalking protection orders will allow courts in England and Wales to move faster to ban stalkers from contacting victims or visiting their homes or places of work or study. That will grant victims more time to recover from their ordeal. I am sure that my right hon. Friend will continue to campaign on the issue, but I hope he feels reassured that the Government are making every effort to support victims of those terrible crimes.”

Following the passage of last night’s Bill, Mr Halfon said: “I am delighted that after many months of work on this, the Government’s Domestic Abuse Bill passed last night.

“This is an important step forward in providing protection for victims of domestic abuse. After meeting with Charlotte Budd, a Harlow resident and survivor of domestic violence, and hearing her story and experiences, this Bill is hugely welcome.

“Stronger measures will be put in place to punish the perpetrators of these abhorrent crimes, as well as giving victims better support and protection.

“I will continue to work hard on behalf of Harlow residents on this campaign to ensure that survivors of domestic violence get proper justice and support.”