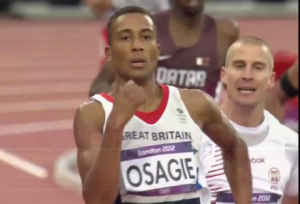 YOU may have noticed that that the BBC is re-running their coverage of London Olympics of 2012.

As part of their coverage, they have produced a number of short films called “Olympic Secrets”.

Andrew Osagie made the final of the 800 metres running a personal best of 1.43.77 in a race that saw Kenya’s David Rudisha real the World Record in an astonishing 1.40.91.

Andrew’s performance is probably the greatest performance in the Olympics by a Harlow sportsperson and is testament to his ability and determination from when he went to Burnt Mill Academy to the day he lined up in an Olympic final.

The interview solves the mystery.

Andrew Osagie chats to Steve Cram about taking on David Rudisha at London 2012.

Watch now on the Red Button, or stream on @BBCiPlayer.