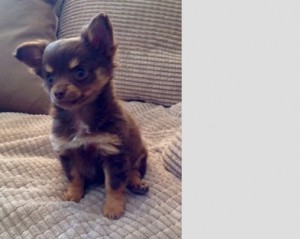 are appealing for help to trace a four-month old puppy which was stolen in a burglary in Harlow.

A HOUSE in Ladyshot was broken in to at around 1.45pm and a Chihuahua cross puppy with long hair called Caramel was stolen.

She has a lump on her stomach from a hernia which is scheduled for surgery to remove.

The dog is adored by the victim’s seven-year-old girl and they are described as being inseparable.

Two men were seen to break in to the house via the back door. Police are making enquiries about a brown Mini vehicle which was seen in the area at the time.

The victim said: “We don’t care about any of the other items which were stolen we just want the dog back. We don’t even care who the people are who stole her.

“We are devastated. It’s like having one of your children taken from you. We just want her home.”

Anyone with information is asked to contact officers at Harlow police station on 101 or Crimestoppers anonymously on 0800 555 111.