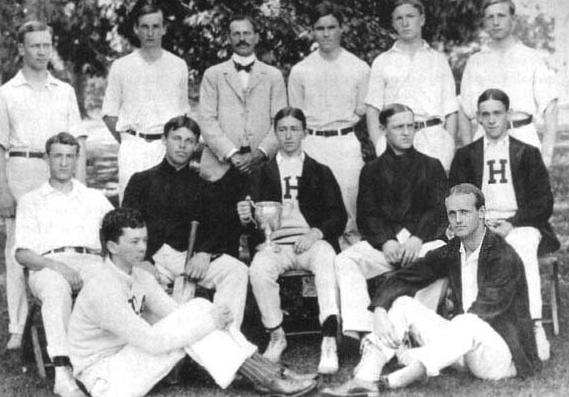 THE PRESIDENT of Harlow Cricket Club, Alan Howick visited the USA last year and made a fascinating discovery.

Mr Howick has described his visit to us.

“Back in the early part of 2018 The Cricketer Magazine ran a wonderful four page article
about the CC Morris Cricket Library in Philadelphia, PA, USA.

As my daughter and cricket loving grandchildren now live in Pennsylvania I have
a yearly commitment ‘to visit’ and my most recent was mid-August, this year. So, not
wanting to miss up on a cricketing opportunity so far away from home whilst ‘family
visiting in the USA’ I communicated with the library who very kindly invited me “to call
in whenever you are passing by” – as you do!

What an amazing place and cricket collection, mostly late 19th century USA cricket but
also a treasure trove of interesting artefacts from letters exchanged with Donald
Bradman, cricket bats including both Bradman and Dr W G Grace, signed picture by
Ranji, photograph albums including the 1897 England tour by ‘The Gentlemen of
Philadelphia, the list (or mountain) carries on!

I was enthusiastically shown around by Paul Hensley ‘The curator’ and President of the
Philadelphia Cricket Association in their ‘New home’ being a still active (occasionally)
cricket pavilion overlooking a cricket ground. Suitably surrounded by magnificent variety
of mature trees all set in the heart of the Haverford College grounds in a most pleasant
part of ‘Philli’ and almost, next door to The Merion Golf Club where there is also a
cricket ground!

They have at the moment just one large room stacked to the gunnels of books, pictures
and goodness knows what else. Paul is currently seeking funding to expand the pavilion
to house this marvellous and unique cricketing collection. “Probably the best in ‘The
western hemisphere’ according to Paul who showed me their complete selection of
Wisden’s as well – apart, I noticed, from 2018 edition!

This little unknown outpost, like the Falkland Islands are to the UK, should be regarded
the same with our cricket family. I do hope more of us both visit and where possible, to
fly their USA Cricket flag – if they had one.

I didn’t spot one but I did admire the wonderful collection of loud stripped blazers dating
back to the late 19th and early 20th century. When I mentioned the absence of an MCC
version Paul replied very quickly, but they are not an American cricket club, are they!

Their guest of honour list is a true ‘who’s who’ of cricket. From the late Freddie Truman,
Two Knights ‘of the realm’ being Sir’s Gary Sobers & Richard Hadley. Mark Nicholas,
former MCC President Derek Underwood along with many more well-known cricketing
names.

The CC Morris Library is remarkable, let us hope Paul Hensley and his enthusiastic team
(three that I counted!) continue their excellent work by preserving the USA cricket history
and achieve the funding to improve the housing of this brilliant collecting.