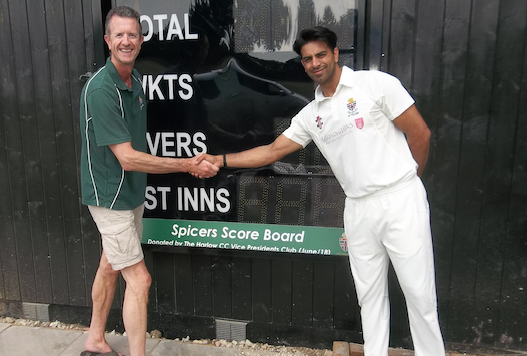 FOLLOWING the thoughts of how can they get more people interested and support their cricket club plus, recapturing past members and players to continue their interest and support in Harlow Cricket Club, two life members, Simon Baulcomb and Alan Howick came up with the idea of forming a VICE PRESIDENTS CLUB to replace the tired and somewhat defunct former Vice Presidents list.

Coming up now for it’s third year, the HCC VP Club have held two Spring Suppers, the first hosted by former England Captain Mike Gatting MBE in 2017, then last year twin Essex county cricket legends John Lever alongside Ray East. Then this spring, on the 5th April another Essex legend, Stuart Turner has been invited to host the evening. Tickets are for sale although as in the previous events, “we expect a sell-out”, reported Simon.

Other events promoted by the VP Club have included golf days, Sunday luncheons ‘whilst watching cricket‘ to name just a few.

To date, monies raised have been invested in a number of important gifts to the cricket club including another electronic score board this one being used for the second cricket ground at their home at Marigolds, in Old Harlow.

The VP Club Chairman, Simon Baulcomb says “everyone is welcome to join although we are very keen to welcome back past players to enjoy our brilliant facilities crowned by our new club pavilion which is brilliantly situated between the two cricket grounds”.

Simon went on to say “this season is going to be busy for our VP Club, as well as the Spring Supper, we are hosting a lunch on Sunday 19th May when Hertfordshire Ladies are playing The Netherland national team in a 50 over match then in August a similar format when the Marylebone Cricket Club (MCC) are playing a mid-week match (1st August) against The Club Cricket Conference, that is a massive honour and recognition of our club and it’s status in local and regional cricketing terms”.

The VP Club is also publishing periodical newsletters recording the history of the club which goes back as far as 1774, therefore, probably one of the oldest clubs in south east England.

These will also appear on the Harlow CC Vice Presidents Club social media outlets which are being launched in the next week or so.