A PIECE of wreckage from a German bomber which was shot down during a mission to destroy homes in Britain during the Second World War is to be auctioned to raise money for the more peaceful and constructive purpose of helping today’s homeless.

The 35cm long piece of airframe from the Dornier bomber has been mounted on a base with a plaque and a model depicting what the plane looked like before it met its end in 1940. It will be sold in aid of Salisbury Trust for the Homeless, the city’s local charity for the homeless, by Woolley & Wallis in Salisbury on 20 November 2019.

The Dornier Do17z aircraft with the number FI BT 76 on its fuselage was shot down by anti-aircraft fire and RAF fighters during a raid on London on the night of 15-16 November 1940. It crashed near Harlow and all its five crew were killed. The bodies of four of them were found and given a respectful burial.

The crash site was on Latton Hall Priory Farm, just off the A414 across from the Hastingwood roundabout.

The crash site has been excavated by aviation historians on two occasions and a number of pieces of wreckage recovered. One of these – believed to come from the tailplane – was later given by one of the excavating team to a Salisbury man who has an interest in the home front during the Second World War.

“I recently decided that this historic piece of wreckage should be used to raise money for a constructive purpose,” he said. “Selling it to help STFH’s campaign to rebuild people’s lives and get them out of the cycle of homelessness is the absolute opposite of the Dornier’s original destructive mission when it took off bound for London.” 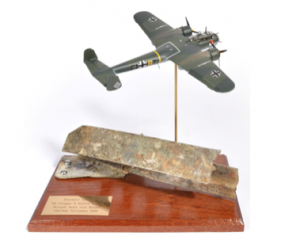 He approached Declan Sibley, who runs the Salisbury Model Centre in Fisherton Street, who expertly mounted the piece of wreckage on a board with a plaque, both of which are surmounted by a model of a Dornier Do17z with the plane’s number painted on the side.

Salisbury-based Woolley & Wallis agreed to auction the piece of Dornier in its sale of Medals, Coins, Arms, Armour & Militaria on 20 November waiving the fee it normally charges vendors. The lot is estimated at £100 to £150.

“We are regularly approached by some of the bigger national charities to sell donated items on their behalf, so I am really pleased to be able to help a charity on our doorstep; especially one that does such vital work,” said Ned Cowell, the auction house’s medals, coins and arms and armour specialist. “The object we are selling is a really interesting piece and I hope that it does well and raises a decent amount to help the Trust and those people who rely on its support.”

Gordon Pardy, STFH’s Head of Fundraising, said: “We are extremely grateful to Woolley and Wallis for auctioning this piece of memorabilia on our behalf and for waiving their charges. Salisbury Trust for the Homeless receives no financial support from either central or local government and so we are very dependent on the generosity of individuals and companies in Salisbury and South Wiltshire.”

Salisbury Trust for the Homeless aims to provide a long term solution for the homeless by providing accommodation and support for single people over the age of eighteen. It helps them regain confidence and self-esteem, learn life skills, find education, training and employment opportunities, and access permanent accommodation, so returning to independent living. In recent times it has achieved a success rate of more than 80%.

A combination of fighter attack and anti-aircraft (AA) fire are thought to have been the cause for the demise of a Dornier Do.17Z, werke number 2798 (Fl+BT), in the North Weald area.
North Weald Airfield Museum Archives 17 Crashes and Mishaps 3

At 2355hrs on the night of November 15/16. 1940 this Dornier from 9/KG76 crashed with its crew of five into a field some 200 yards west of Latton Priory Farm, Rye Hill, Harlow. The crew, consisting of Lt 8 Wagner, Fw R Grommer, Fw A Hans, Gefr F Heilig and Auffz W Hockendorf all died in the crash.

When, in the 1970s, the site of the crash was investigated by the London Air Museum a number of items were recovered. These incliuded a damaged Iron Cross medal, some bank notes and coins. A further dig in 1984 turned up a number of further items, including the sole of a boot and even later this identification plate.