Get your feet to Grounded at the Harlow Playhouse 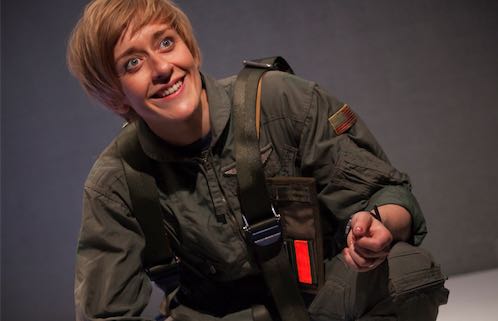 “My pulse quickens. It is not a fair fight, but it quickens.”

She’s a hot-rod F16 fighter pilot. She’s pregnant. Her career in the sky is over. Now, she sits in an air-conditioned trailer in Las Vegas flying remote-controlled drones over the Middle East. She struggles through surreal 12-hour shifts far from the battlefield, hunting terrorists by day and being a wife and mother by night.

This extraordinary play, which tours the UK following huge successes with audiences and critics at the Gate Theatre, targets our assumptions about war, family, and what it is to be a woman.

Christopher Haydon said, “George Brant’s Grounded is one of the finest plays I have ever directed. It’s an extraordinary, caustic exploration of one of the most important issues of our time and it packs a multitude of ideas in to a single, brilliantly compelling character. Since opening in Edinburgh last year, it has been hugely exciting to see how thousands of people have connected with it and so I am thrilled at the opportunity to take it on tour and allow it to reach an even wider audience. As a small pub theatre we rarely get the opportunity to share our work as widely as we would like and so this is the perfect way in which to bring the work of the Gate to the rest of the country.”