COMING to Harlow Playhouse this Easter, as part of a national tour, ‘Robin Hood’ is set to be full of family entertainment and mayhem from start to finish!

Join our hero Robin Hood, played by CITV’s Hi-5 Chris Edgerley, as he puts right the wicked Sheriff of Nottingham who rules over the good people of Sherwood, collecting taxes to pay for his own evil plans. Silly Willy Scarlet, played by Harlow’s favourite the hilarious Tom Swift, is eager to help and join the Merry Men (Britain’s Got Talent comedy impressionist Philip Green as Little John, and from Harry Potter and Channel 4 Seven Dwarfs Josh Bennett as Big John).

The auditions for ‘Sherwoods Got Talent’ are the perfect distraction as the Sherriff kidnaps Maid Marian – will Robin Hood and his very Merry Men be able to rescue her in time?

JOIN the gang and enjoy this adventurous Easter Pantomine with laugh-a-minute jokes, animated projections, and a collection of toe tapping, original, sing-a-long songs for the whole family.

From Saturday 4 April to Thursday 9 April.

Once again, we’ll have a very special ‘relaxed performance’ for those that might not feel comfortable in a formal theatre setting, such as patrons with learning disabilities, Down’s Syndrome, Autism, or sensory and communications difficulties. This performance will take place on Thursday 9 April at 11am and is bookable directly through the Box Office. 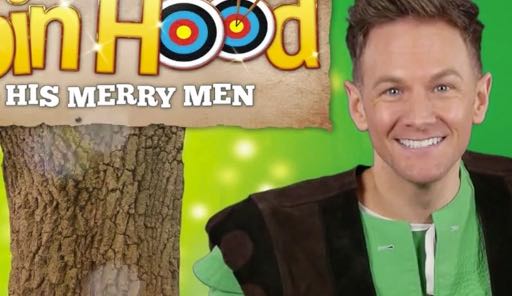