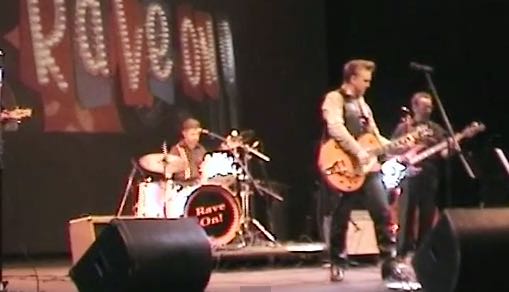 FOUR giants of the Rock ‘n’ Roll world come together for the first time in BE BOP A LULA! A high octane show which will take your breath away from the first chord to the explosive finale!

Join us for the biggest rock n roll party in town with a live band, as we celebrate the music of Eddie Cochran, Gene Vincent, Billy Fury and Roy Orbison.

Eddie Cochran and Gene Vincent first came to the UK in the legendary 1960 tour. Eddie tragically never made it back home after dying in a car crash just outside of Chippenham on 17th April 1960, but his musical genius paved the way for future artists such as The Beatles. This year we commemorate the 55th anniversary so get out of your seats and dance along to Summertime Blues, C’mon Everybody and many more.

Gene Vincent was an instant Rock ‘n’ Roll rebel who fans simply loved with hits Be Bop A Lula, Say Mama, Race With the Devil.
Billy Fury is known as Britain’s true rocker having written his own first album ‘The Sound Of Fury’. Half Way To Paradise, When Will You Say I Love You and Wondrous Place.

Roy Orbison needs no introduction. With songs such as ‘In Dreams’, ‘Crying’, ‘Mean Woman Blues’ and ‘ Only The Lonely’ he is a big addition to the already amazing line up.

Backed by some of the UK’s finest musicians, Liverpool born Gavin Stanley and New Yorker, Lars Young recreate these legends with passion and a very real ‘feel’ of the artists and their music.