Henning brings das hause down at the Harlow Playhouse 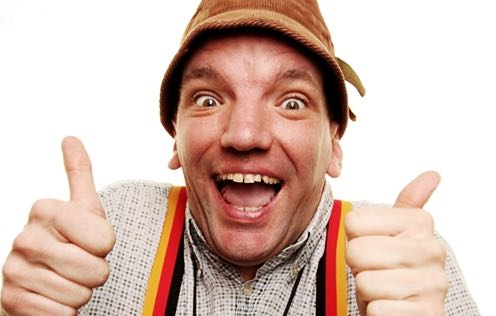 HENNING WEHN is a unique comedian. It is not just because he is german and all the racial stereotypes attached to that. There is something very natural about him.

So, when he tells you, in the first half of the show, about his journey from being marketing officer at Wycombe Wanderers to a full time comedienne, it is very much a human interest story. You can imagine him passing by the pub, seeing the Open Mic sign and the rest, being history.

It was a packed house on a Sunday night at the Harlow Playhouse and the audience loved his “Ein, Zwei, Drei” show. S lot of his humour is, in many ways, very german, as it relies on taking you on a journey through logic. Whether it is the “It pays the mortgage” thread, or the story of sitting next to Japanese tourist on a train. It all makes perfect logical sense. I

It also made us wonder if he has ever played a gig in Germany?

Henning Wehn is very much a natural comedian. And something of a surprise star, and he is probably the most surprised. He does got to an effort of making an entrance, having props and sign-posting to an encore.

You get the feeling that Henning Wehn likes comedy and likes the United Kingdom he has discovered over the past thirteen years.

One of the fascinating moments of a show like this was the fact that most people consume their lives to own a property. Most people laughed heartily at the mortgage jokes and yet when he asked if anyone did in fact rent (as is the norm in Germany) only one man put his hand up…Then again, this is a show where a German gets out a replica World Cup and taunts the audience that this is probably the nearest the English are going to get to it. Not only do we all laugh. Some audience members, get their photo taken with Mr When and the World Cup.

We loved his World Cup tasting, his Tom Jones joke, his reference to Dennis Nielsen’s house and his appearance on QI.