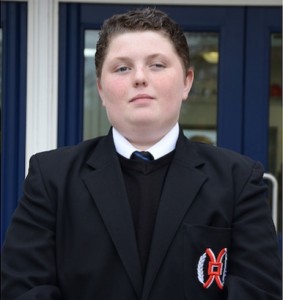 A TEENAGER has been praised by police for handing in a wallet containing hundreds of pounds – which was set to turn a homeless man’s life around.

Charlie Manly, 15, found the wallet near Harlow Playhouse with £285 in cash inside.
The Year 11 student at Burnt Mill Academy, in First Avenue, contacted the police as he feared the owner would miss the large amount of money.

The police were able to trace the owner through homeless charity Streets2Homes and found the elderly man had fallen on hard times, but was just beginning to turn his life around with the help of the charity.

Vince Edwards, property officer at Harlow Police, said in a letter to Charlie’s headteacher: “This is not something I often get the chance to do, but in the circumstances I thought I must drop you a line and give thanks for one of your pupils. Young people often get bad press these days, but it is so nice when you get a story like this. I feel note only is he a credit to himself, but also to his parents and, of course, to your school.”

The owner was so impressed at Charlie’s honesty, he handed over £20 as a thank-you.

Good Samaritan Charlie said: “I handed the wallet in at the police station and three days later I was told about the homeless man. When he found out it was a 15-year-old who found it and handed it in, apparently he was shocked as he didn’t think he would see the money again.

“I am really glad the man got his wallet and money back and can now get his life back on track. I feel great that I did the right thing. I could have done anything with £300, but I know I did something great and hope that karma will come back to me as a result.”

Kerrie Eastman, chief operations officer at Streets2Homes, said: “This man has been homeless for quite some time and we had just helped him to get back on his feet. Without this money, he would not have been able to pay his rent and bills and would no doubt have lost his home again.
“To know a young lad handed it in restores your faith in human kindness. Thank you Charlie, we are really proud of you.”

Helena Mills, head of Burnt Mill Co-operative Academy Trust schools, said: “I am not at all surprised by this act of kindness. The children at Burnt Mill are exceptional; they give above and beyond to help each other and other people within the community every day.

“It is an honour to be a teacher in Harlow because the children are so kind and helpful. It is something we reinforce all the time at Burnt Mill. GCSE results are important, but being a good citizen is equally as important.

“Charlie is a great role model to other teenagers.”