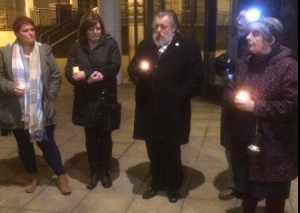 WHILST just over a month has passed since the world lay witness to the raw and horrific terror inflicted upon the 130 victims of the Paris attacks – many gathered together to turn towards the future. In a plea for our continued pursuit of peace. Tribute was paid to the tragic loss of life that has befallen us all, within every community; within every faith — and to the community which strives to extend solace to all.

Sunday evening’s vigil outside the Civic Centre was well attended by the town’s councillors, community leaders and members of Harlow’s Faith Forum, as well as others who wished to gather. During the half hour service, the differences and intolerances of politics and religion withered away. In its void grew a sense of stillness and concord, pulling us together rather than tearing us apart. Being fortunate enough to attend the event I listened to each of the contributions, and as to why this common longing for peace resonated so deeply. To watch the weight of intolerance and prejudice be shrugged of the shoulders of so many gave me fresh hope.

We stood gathered in a circle and shared anecdotes of the wars and conflict we had experienced, be it us personally or of those we know. Coming together like a jigsaw, were the words that formed a new world vison, offering a glimpse of what we longed to achieve. The mix of people who attended was gratifying to behold. Having asked an organiser what had inspired the event I was stirred by their response. In short, the vigil offered a chance for the ‘wider community to come together’ and for Harlow to ‘do something’ in response to the Paris attacks. In my mind, I feel that the need for ever greater cohesion and stronger unity is growingly present, and that vigils and events such as this serve in the interest of us all.

Following the initial vigil, some went on to St Paul’s Church, where further voluntary readings were offered. During this time, with tea and coffee in hand, we all gathered to reflect and to share our thoughts. The urgency and misery of our present was met with the optimism for our future. By the time we drew to a close, I feel that all had left with a sense that people had at least stood and been counted, and that our voices were heard — albeit if it were only by those present.

The immediacy of the Paris Attacks are in no doubt still imprinted upon the minds of us all. Time and time again we hear of how the horrific events of November the 13th could have unfolded in Birmingham, Manchester or London. Yet ever still, my mind is cast to the reading of a certain individual during the vigil, who quoted Dr Martin Luther King Jr in saying:

In closing, I wish only to impress the message that Harlow did come together last Sunday. Harlow came together in an act of unity that paid tribute to those lives lost whilst renewing calls for the continued pursuit of peace. Moreover, I hope for our community to come together ever closer still in uniting against the threat of terrorism, not through violence but through our tolerance, compassion and common endeavour.