Legal orders to prevent unauthorised encampments placed all over Harlow 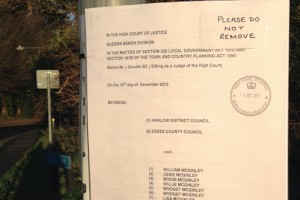 LEGAL orders are being posted on land across Harlow as part of a ground-breaking district-wide ban in force in the town against unauthorised Traveller encampments.

This week Council staff are serving and placing 3,000 injunction orders on 321 vulnerable sites across the town including parks and playgrounds, previously occupied sites, highway verges, schools, cycle tracks and private land. The order also bans 35 named persons from setting up encampments anywhere in the district of Harlow.

The injunction, which runs until midnight on 16 June 2017, was granted by the High Court to Harlow Council and Essex County Council last Wednesday (16 December 2015) and follows the two Councils being granted an interim order in March 2015. Breaching the injunction is a serious offence and could lead to a custodial sentence, a fine or the individuals could have assets seized.

Serving of the orders on land is essential and a legal requirement for the injunction. The orders provide vital evidence for the Council to inform any Travellers setting up a unauthorised encampment that there is an injunction in force. The Council is also aware that some documents may get displaced by weather conditions. Once served on the land photographs of each document pack on site is taken as evidence.

A copy of the Councils’ press release on the injunction being granted last week can be found at www.harlow.gov.uk/pr15-121