Enjoy some Nights on Broadway at the Harlow Playhouse 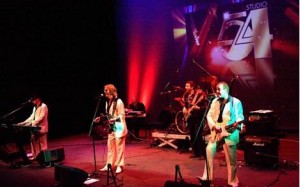 THE Bee Gees were three brothers who from singing close harmony as children grew to become world superstars by their early twenties. They got to a point where they broke up and could no longer speak to each other; only to reform and reinvent disco music as in ‘Saturday Night Fever’. They went on to be acknowledged as some of the greatest song writers in history, and it has been estimated that the Bee Gees’ career record sales total more than 220 million, making them one of the best-selling music artists of all time.

The Bee Gees Story – Nights On Broadway present a tribute to the Bee Gees through a fantastic live concert, featuring the Gibb Brothers incredible songs, from over four decades, from the 60s to the 90s. This show gives the audience the experience of being at a Bee Gees concert, with a unique blend of classic hits, acoustic medleys and dance floor fillers. The total song writing virtuosity of the Gibb Brothers is not neglected. Guest artists complement the show, appearing as some of the musical legends, such as Barbara Streisand, Celine Dion and Diana Ross, that recorded songs specially written for them by the Bee Gees.

The show is a totally live concert experience, with a seven piece band from Ireland who pride themselves on musical authenticity, and in particular the accurate recreation of the vocal talents and harmonies of the Bee Gees.

Whether you favor the golden era of the 60s, the dance floor hits of the 70s, the comeback hits of the 80s & 90s or the string of hits they wrote for various artists along the way, this show has something to entertain everyone from the novice to the most discerning fan. Costume changes compliment the show to give a full Bee Gees Concert Experience.