AWARD-winning theatre company, Global Productions, will be making a welcome return to the main stage at the Harlow Playhouse this month with an action -packed version of E.Nesbit’s much loved children’s classic The Railway Children, which runs for five performances during half term week from Friday 19th to Sunday 21st February. (Tickets here.)

Adapted by Mike Kenny and originally performed to rave reviews at the Kings Cross Theatre, The Railway Children, is set in Edwardian England and tells the story of what happens to children, Roberta, Peter and Phyllis, when they’re forced to swap their cosy London life for a series of unforgettable adventures among the inhabitants of Oakworth, a small rural village deep in the Yorkshire countryside. Featuring a wonderful cast of characters, a working station and moving train, the show will delight the entire family.

Director Michael Philips said, ” It has been a very enjoyable challenge to bring The Railway Children to the stage and to work with a large cast of talented actors of all ages to bring these colourful characters to life.

The story is told from the children’s point of view and youngsters of all ages will be able to identify with their adventures!”

“This has been one of our most technically demanding shows and it’s wonderful to see it all coming together to conjure up the sights and sounds of Edwardian England. I don’t want to give too much away but we’ve built a full – size steam train and when it moves across the stage it will be something special.”

Global Productions has been performing at Harlow Playhouse for over 10 years and was last seen there in May with its production of Alan Ayckbourn’s A Chorus of Disapproval which was also performed to great acclaim last summer at the world famous Minack Theatre in Cornwall. 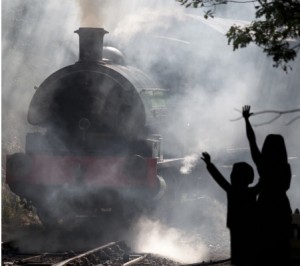