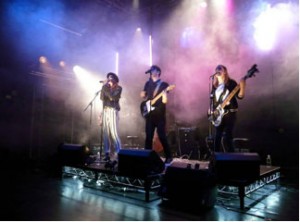 COME along for a unique evening of live rock music as Weekend Rockstars is coming to the Harlow Playhouse on Friday evening (20th May).

Part gig, part film, part play, the show is in itself a whole new genre, ‘album play’, that offers up a pulsating soundtrack played by a company of actor-musicians, with the narrative of the songs played out on stage.

With influences for the show’s music coming from bands such as The Arctic Monkeys, The Streets and The Libertines, this is without doubt a must-see for anyone who calls themselves a fan of rock and roll.

You will also as an audience get to follow the high and lows of the character Terry, his girlfriend and his friends on what is a night is sure to get you dancing and singing along.

The production was reviewed in the Guardian, with the review saying the following of the show:

’Drilling home the camaraderie of the indie fan experience… The catharsis and solace this genre provides for many amid life’s most vicious moments!’

Please note as well that the tickets for this performance are part of the ‘Pay what you can’ scheme at the Playhouse and there will be a collection box at the end of the show.

If you would like to purchase tickets for the show, please visit the Harlow Playhouse website www.playhouseharlow.com or phone the ticketbox office number on 01279 431945.

The show starts at 8pm.