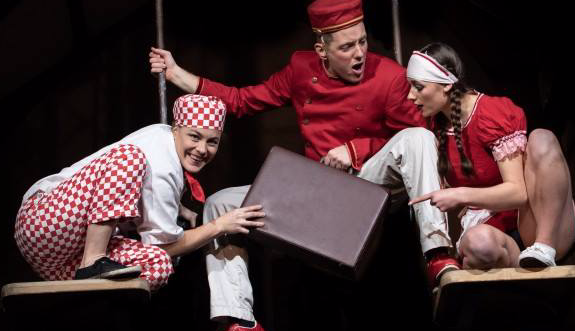 THIS reviewer wasn’t entirely sure what to expect from Hotel Paradiso even though he had written a preview and interviewed company director, Annabel Carberry. What he experienced was a wonderful piece of physical theatre meets comedy on the main stage of the Harlow Playhouse.

The audience age range stretched form very young to mature. It was going to be a challenge to entertain us all but the cast of Hotel Paradiso did. This was a traditional narrative of “we are going to lose the hotel” played out with traditional circus skills but this was so vivid and so entertaining.

More than anything else, it was seeing such circus skills on the main stage of the Playhouse. From the incredible acrobatic skills of Tasha Rushbrooke to the comedic hula-hooping of Annabel Carberry.

This was an appreciative audience who warmly applauded each and every display of gymnastic artistry. You do worry that there may be parents with children hanging off the lampshades all half term!

The sets were simple yet effective. They made good use of silhouette and props. The pace was perfect as they motored along from set piece to set piece.

Massimiliano Rossetti’s character was like watching a character from a different age and Roisin Morris, a grenade of gymnastic intensity. Let us nor forget the wonderful balancing skills of Matthew Green and the maitre d’/master of ceremonies, Lawrence Swaddle.

The show played to two healthy audiences on Sunday. They received a rapturous rounds of applause at the end from an audience who recognised they had been entertained by a group of very talented performers.

This reviewer looks forward to seeing them again.