Review: Two-mendous at the Harlow Playhouse

Review of Two at Harlow Playhouse

The saying goes, “If you need something done, ask a busy person” and you’re not going to find a busier group of people than the three involved in last night’s sold out production of Jim Cartwright’s Two at The Harlow Playhouse. In fact, sold out doesn’t quite cover it. Theatre 2 was packed tighter than Japanese tube carriage and the atmosphere was palpable. 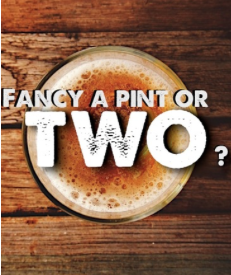 Kirstie Brough, Ben Parsley and Emily Parsley are right in the thick of it when it comes to running the Harlow Playhouse. Kirstie is the Commercial & Development Manager, Ben the Technical Manager and Emily the Technical and Projects Manager. They are at the heart of running the building; prepping for this year’s Pantomime, sourcing new shows from around the UK, providing support for the hundreds of shows coming in… so they decided to put on a show as well!

Kirstie and Ben (our leads, supporting cast and offstage sounds combined) have become very adept at the all engaging performance having previously performed their solo shows ‘Spine’ and ‘Bottleneck’ respectively. They clearly know how to hold an audience’s attention and the bringing of these two talented performers together in one show was a prospect to behold.

As you walked into the theatre space, the set was clearly marked. It was a pub but with only a slice of that pub clearly decorated; the rest of the space had a physical presence but was painted black. That was evidently symbolic for what the show was about. Our two public servants were to play serving Publicans and what would unfold was a slice of the lives that come and go in this pub.

In the age of Edgar Wright and Quentin Tarantino it’s all too easy to having a pumping soundtrack alongside the action of a show, but not in this case. Emily Parsley’s razor-sharp judgement and direction (yes, she is Ben’s wife, boss and director!) had none of that, choosing a subtle ‘noisy room in another part of the pub’ ambience as the sound. Even the lighting was minimal. Just as a pub’s lighting would be. And the reason? It was all about the acting. No intro music, just straight into the action.

With 14 characters equally shared, Ben and Kirstie quickly establish their main roles, as the Landlord and Landlady of a pub. With a few modern touches (a Beck Blue here, a chip and pin machine there) it’s clear that this is set now. And these characters, whilst prickling at each other presence link the action as other characters come and go (with some amazingly quick changes).

Choosing specific characters is admittedly like choosing your favourite child, so I will just highlight a couple. Firstly, Ben as Roy the coercive, jealous bully with Kirstie as his physically and psychologically battered partner. Both could have overplayed this but didn’t; the audience were totally silenced by this hideous scenario and the pauses weighed heavily as Roy quietly, slowly and subtly crushed his girl’s fingers in his rage. You just wanted to get up out of your seat and stop it. Powerful stuff. And to counter balance that, Ben and Kirstie also gave us the ’Fat and Old’ couple, that while away the time talking about old film extras that may have died long ago and still grieving the loss of Elvis. These characters summed up by the old lady as they staggered out arm in arm, “we may have been unlucky in life but we were lucky in love.”

And that is the essence of what the play about, love in all it’s forms. Some pure, some twisted and some damaged by life changing events. While the owners of the pub weave through the play, you do start to unravel what their beef is with each other and it climaxes in a powerful scene of mutual grief. Kirstie gut-wrenching scream of a mother in pain was a difficult thing to witness.

Both performers were at the top of their game, displaying an ability to play a range of ages, personalities and nationalities with ease (Ben’s Alfie Moon-esque or Kirstie’s Russian bride were other highlights). It was a delight to witness it. And the fact that this was Emily’s debut as a director, simple astonishing.
R
umour was bubbling around the theatre bar after the show that they might look at performing it again at another theatre. So, if you missed the show this time (and you should be kicking yourselves if you did), make sure you keep an eye open so that you’ll be ‘having a lovely time… inside’ another venue.