Young poets took to the stage to perform in front of a live audience.

For the second year running, pupils were given the opportunity to perform individually or in groups any piece of poetry, whether published or their own work.

Magdalena Dackombe, Year 6 teacher and literacy co-ordinator, said: “We had so many pupils want to take part in our first poetry slam last year that we thought we would do it again this year. 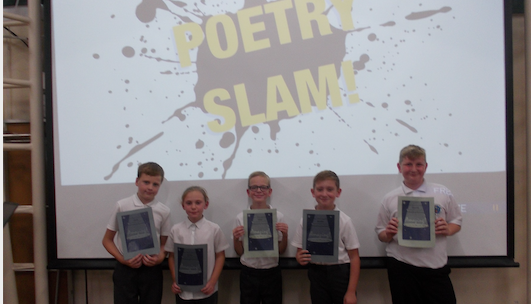 “The whole idea of the event is for children to choose a poem – whether it be one they already know and love, one they have studied or one they have written themselves – and perform it to the whole school. It is about engaging them in poetry, but looking at it from a different perspective.

“They could perform it on their own or in a group, they could use different voices, they could sing parts of it or use drama; however they wanted to perform their piece was fine.

“They put their whole hearts into it. It was so amazing watching them bring their poems to life.

“This work is important as children read a lot of books, but do not so often read poems and can be scared of them in case they do not understand them or their message. We are trying to let them have their own interpretation of poetry and to make them realise it is not always read in one way, that there are different ways to read poetry.”