A HARLOW teenager has been banned from keeping pets for two years and given a court order after he threw a cat over a fence by its tail reports the BBC.

The 15-year-old from Harlow, who cannot be named for legal reasons, admitted causing unnecessary suffering to an animal at Chelmsford Youth Court. 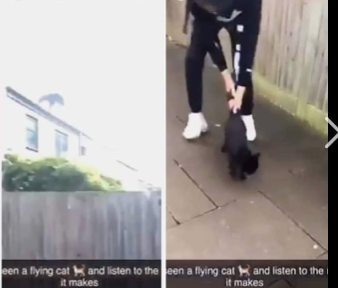 The incident on 5 September, which was filmed, created “outrage” on social media, the court heard.

He also admitted robbing a former friend of his motorbike with a weapon.

The boy brandished an object thought to be either a bayonet or a crowbar in the attack on 12 February, after shoving the other boy from the bike, prosecutor Ashley Petchy said.

In a video played to the court, a boy can be heard encouraging the youth to throw the feline before the cat can be heard “crying” as it is flung by its tail.

Mr Petchy said: “He said the cat was friendly when it came over to him. He said he saw the cat again after and it was injured.”

Chairman of the bench Ian Andrews said the boy, who was also given a restraining order preventing him from contacting the robbery victim, had narrowly avoided a custodial sentence as both were serious offences.

Sentencing he said: “You showed no hesitation in throwing that cat over the fence. We don’t know if it sustained any injury but we must assume that it would have been affected by what we have seen in the video.”

Elliot Moulster, in defence, said the boy was “emotionally immature” and was susceptible to peer pressure.

The teenager was also ordered to pay £400 compensation for damage to the bike and a £20 victim surcharge as well as to fulfil the 12 month referral order.