YOUNG leaders got to see how their roles feature in the real world with a trip to the Houses of Parliament.

Members of the Junior Leadership Team at Cooks Spinney Primary Academy, in Harlow, were intrigued to see how the work they are doing in school is relevant to the wider world. 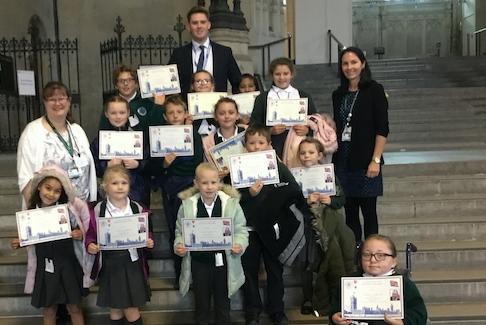 They were invited to visit Parliament by Harlow MP Robert Halfon who met with them and gave them a tour.

Teacher Sarah Brennan said: “Members of the Junior Leadership Team represent the voice of their peers within school. They are voted into their position by their fellow pupils with one boy and one girl representing each class and one member speaking for those with special educational needs or disabilities.

“Because of their work, we were keen for them to see how their adult counterparts operate in Parliament. They got to see that the position they have taken at school is also a role which adults carry out. They saw how important it is to have representation of people’s views.”

Members of the Junior Leadership Team take the views and requests of their classmates to headteacher Neil Stirrat.

Mrs Brennan said: “We are trying to develop children’s speaking and listening skills and this is giving them experience of communicating with adults and putting forward the views of others. Children should realise they have a voice and that their views are worth listening to.”