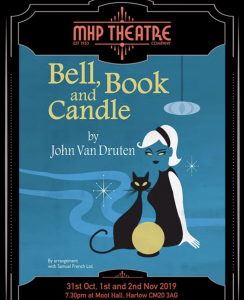 SOMETIMES, when reviewing a play you need a little bit of time to gather your thoughts. Of course, you don’t always have that luxury. Sometimes, you give a favourable review to a play that you then look back at a few months later and find you weren’t actually that keen on. The reverse is true. Was never that keen on a play called Conspiracy that this reviewer saw at the Edinburgh Festival in August. But the more one thinks about it, the more this reviewer liked it.

So, when this reviewer left Moot House having reviewed Bell Book and Candle, we were heading for a mixed review. Why? The first half felt like a bit of a plod. If someone was directing the director then they may have encouraged her to “up the pace” but on reflection, that might have been unfair.

This play is harder to present than you think. A 1950’s play, it tells the story of a witch who casts her spell on her neighbour. It is neither comedy, thriller nor drama. That’s quite a challenge.

The performance is held together by Eve-Marie Darby who produces a wonderful performance as love-struck witch Gillian. Eve-Marie performance is a subtle and deft portrayal. She is ably joined by Jack Downey who plays Shepherd Henderson. Jack Downey is eminently watchable and could probably entertain reading the phone book. He sees the right tone as the publisher and makes the part his own.

They are both ably assisted by a scatty Aunt Queenie played by Catriona MacLeay and a very solid performance by Helen Delliston. Mike Rees was also very entertains as thirsty writer Sidney Redlitch.

Just one quibble folks. Too many fluffed lines in the first ten minutes.

This was well directed by Melissa Jones. The production had a warmth and charm to it. The cat Pyewackett played his part as well!

This was much much harder to produce than you think. It falls between so many stools. Just have a look at the film and you may see it is as neither one thing or another.

But maybe that speaks volumes for MHP Theatre who are not afraid to take on challenging work and for that we implore you to continue to support them.