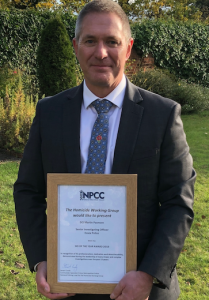 ONE of Essex’s senior detectives has won a major national award and named the best in the country by his peers.

DCI Pasmore has 13 years’ experience leading major investigations and managing teams of detectives on some of our most high profile murder cases.

He said: “It’s very humbling. To be nominated in the first place is one thing but then to win such prestigious award nationally is difficult to get your head around really.

“I knew I wanted to be an SIO when I had worked in a tactical team where we were doing plain clothes and undercover work and really getting under the skin of the bad guys.

“For me the most gratifying part is getting justice for victims and their families. It never ceases to astonish me the dignity of the people I meet who are going through the most unimaginable of times.

“I tell them that, as a whole team, we’re going to put our arm around you, we’re going to take you through this journey as best we can and be there every step of the way.

“And then the most gratifying thing is sitting in that court room with those families and hearing that guilty verdict.

“Of course when it doesn’t go your way it’s a massive disappointment and that hurts because you feel you’ve let the family down but you try and pick yourself up because you’ve done the best job you can.”

“He is an excellent detective who works tirelessly to get justice for victims and their families but perhaps his most important quality is the compassion, empathy and humanity with which he does this.

“He always tries to do what’s best for families and they are at the heart of every decision he makes.

“This national recognition for his dedication, professionalism, and detective work is thoroughly deserved.

“He’s an inspiration for other officers and I’m proud to say he’s part of the force.”