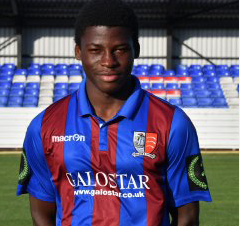 A ST MARK’S pupil is hoping for FA Cup giant-killing glory as he plays for non-league outfit Maldon and Tiptree tonight (Friday).

Al Amin Kazeem is a year 13, sixth form pupil at the Tripton Road school but all his energies will be concentrated on beating League Two, Newport County in the FA Cup Second Round.

He plays left-back and has made sixteen appearances the season.

The Essex part-timers, who play in the eighth tier Isthmian League North Division, are among 12 non-league clubs one win away from a potential tie with a Premier League club.