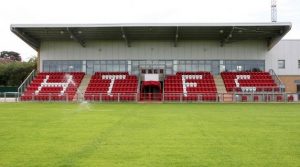 TODAY’S encounter reeked of one that concluded just moments before. Harlow, like Manchester City, are a team in the upper echelons of the division, although not always in full control thus far this season. Northwood meanwhile, in Newcastle-esque fashion, leak goals, but rarely go down easy.

The script here in The Isthmian South Central, much like in the top flight, was ripped up. The ‘lesser team’ went went home with a better result.

Much like City, Harlow conceded due to one piece of poor defending, and one moment of magic.

And although Tayo Oybeola’s fifth goal of the season (‘48) – scored in the midst of a strong start to the second half – offered promise, Harlow’s winless run stretched to five games in all competitions, thanks to a lackadaisical four minute spell in which Eric Lopes (‘22) and Ethan Flanagan sealed the deal (‘25)

With The Hawks remaining in 4th, but feeling the breath of Tooting (Two points behind with two games in hand) and Westfield down their neck (Three points, and two games), next weekend’s trip to third-placed Uxbridge suddenly has a six-pointer feel to it. This is not ideal before the halfway point of the campaign, but this team certainly have the ability to bounce back, and return to such winning ways that once saw five straight league victories this season.

Our West London opponents had the first chance of the game, Tyrone Pink chipping gloriously across the box to Charlie Hanford, although the skipper’s shot from eight yards and a tight angle was confidently saved by Josh Bexon, who did well to remove the danger from what is often a precarious goalkeeping situation.

The Hawks heeded this warning, Terrell Egbri and Oyebola contributing to a lively opening quarter with silky combination play. Electric winger Egbri first lofted it delightfully over the back line to his team mate, only for Charlie Malin to get back and make a brilliant tackle.

Oyebola was in promising possession moments later, Egbri’s ball on the turn as deceiving as it was accurate. Again though, solid centre-half defending saw Ethan Flanagan get a toe on the make-shift striker’s shot.

Playing in blue, Pink left Oliver Finch red-faced after going round him at speed. His shot from the edge of the box was equally pacey, but Bexon tipped it onto the post.
Another good save.

Despite their lowly presence of 19th in the away table, the Woods had come to The McCullochs Arena confident and up for the game, much more than their hosts. Such confidence can will you on to attempt something magic, and Eric Lopes took his chance in the 21st minute, curling one in from 30 yards. Bexon would’ve wasted energy diving for it. A true peach rather than an alarming goal to concede, but you can’t argue it wasn’t deserved.

Often sufficient in ‘hanging in there’ or ‘keeping their heads up’, not many Hawks would’ve seen what would happen four minutes later. Quite frankly, they didn’t see, Flanagan finding an alarming out of freedom at a corner, heading in from close range to double his team’s lead.

With the FA, Velocity and Essex Trophy’s all done and dusted for Danny Chapman’s men, tiredness will hopefully wear thin for what is a young squad, balancing work, study and family commitments. Hopefully this hadn’t factored into frustrating lapses in concentration, Hayford winning a free kick on the edge of the box after capitalising on a misplaced Samson Doherty pass.

There was also a brilliant touch and cross from Egbri, headed way over by Doherty. In fairness, he had to adapt from another position, and were his team-mates more alert, someone else could’ve met the header in a better position.

But for all of Egbri’s trickery, Oyebola’s hussling (That had forced Northwood’s back line into a number of impressive last-ditch tackles), Harlow would go into the tunnel a pair of goals down, knowing they’d have to be much stronger in the second half.

Attack, attack, attack was Danny Chapman’s hand, swapping defensive midfielder Elwin Lartey for winger De’Jaune Taylor-Crossdale. The choice paid dividends straightaway, Taylor-Crossdale’s 48th minute cross for Oyebola slightly too high, but enough, as the striker expertly planted into the bottom corner. No backflip to celebrate, the ball grabbed and ran straight back to the centre circle. Harlow were not here to mess around.

Taylor’s assist had come after taking on Gabriel Piorkowski, Woods’ defensive midfielder who was certainly being dragged about by Egbri. But Egbri strayed away from hard work on the hour mark, opting for flair instead. It nearly paid off, a 30-yard potshot on the half volley flashing narrowly wide.

It was a wonder how Harlow hadn’t played like this in the first-half. Egbri played Tiannie Wilson in behind, the following cross delivered with fizz. Another smartly-timed run from Oyebola, but another smart moment of defending, this time Patrick Campbell blocking his efforts.

The visitors had their tails up, and although happy to concede possession, Joe Ringer remained quiet in goal, not having to make any saves of note.

Substitute Christian Adu Gyamfi and Oyebola (again!) would’ve been ruing their luck, the former’s shot looking like it would deflect into the latter’s path, before erratically spinning away. It was turning into a ridiculous day for Oyebola, who ran tirelessly, but two okay chances aside, did not have the ball fall fortunately for him once.

It summed up the game’s second half, The Hawks failing to fly despite a promising take off. Any chance of a result truly crashed and burned, when in the 90th minute, a bouncing ball sat up well for Wilson at point-blank range, but he couldn’t get a connection.

Only scoring one against the league’s worst defensive side and/or conceding two in four minutes to a team who haven’t hit more than three in a match so far, are matters of fact that will certainly cause Danny Chapman to do some thinking as his team approach the festive period. The switch to a 4–1-4-1 at half-time was encouraging, but the gaffer may well choose to examine his defence first. It remains to be seen, but The Hawks can certainly do better, and hope this result proves a one-off.

Harlow’s visit to Uxbridge next Saturday, will see the usual 3PM kickoff.