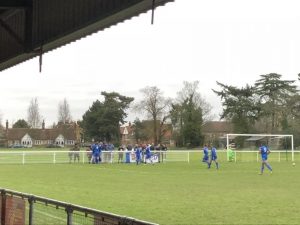 A late Larry Akanbi strike saw Ilford take a share of the spoils in Friday night痴 derby at Oakside against Redbridge. After a goalless first half which saw the hosts denied by visiting keeper Jordan Stansbury on several occasions, Ilford edged in front on 63rd minutes as Jeffrey Cobblah netted for the visitors after running onto a ball over the top and producing a cool finish under the keeper. The lead though only lasted seven minutes as Kurt Smith levelled for the Motormen when an error from the visitors allowed the hosts to run in two against one and Smith converted, and with five minutes to go the hosts led thanks to a Liam Burgess strike. But with two minutes to go Ilford levelled thanks to Larry Akanbi who fired home a rebound after the ball had been hacked off the line from a previous effort, and it means Redbridge’s  four match winning run came to an end as they stay 9th, whilst Ilford end a two game losing streak to climb into 10th.

Hashtag United saw off a stubborn Sawbridgeworth Town at Chadfields. Thomas Anderson made it a dream debut as headed home after five minutes to give Hashtag the lead, but Sawbridgeworth levelled two minutes later when a through ball was slotted home by Jake Skeet. Hashtag  restored their lead twenty minutes into the second period when a George Smith shot took a deflection on route to goal and it was three for the home side when Josh Osude pulled the ball back for Samraj Gill to convert. And the points were sealed when Smith converted a penalty with two minutes remaining.  Despite this the visitors netted a consolation goal in stoppage time through Moyo Ajibade. It means Hashtag remain 3rd and are now eight points ahead of 4th-placed Hadley and five off the leaders Saffron Walden; whereas Sawbridgeworth remain rock bottom, now eleven points off second-bottom Enfield.

Walthamstow remain 2nd and three points behind leaders Saffron Walden after a battling win at Lowfield against Hoddesdon Town. Stow broke through a minute before the break when Kyan Gulliver’s cross found Samraj Gebrai who headed home at the near post, and they doubled their advantage six minutes from time to seal the points when substitute Lewis Francis drilled home. Hoddesdon Town remain 8th after this loss.

Gavin Cockman grabbed a hat-trick as Walden strolled to victory over Woodford Town at Catons Lane to maintain their three-point cushion at the top. Walden took an early lead through Tyler Smalls before Cockman doubled that lead to give them a two-goal cushion; it was three four minutes before the break thanks to another from Cockman, who then completed his hat trick in the 56th minute to make it four for the hosts who cruised to victory, their sixteenth of the season, whilst Woodford fall to 12th.

Hadley had to fight back from two goals down at half time to salvage a draw at strugglers Southend Manor. Manor took a fourth minute lead when a Michael Ogboin cross lobbed over the keeper into the top left corner, and it was two after only ten minutes when after a shot had hit the post, the rebound was tapped in by Jordan Chambers. The visitors, who had been poor in the first half, began the second half well and pulled one back through Solomon Ofori, and then just like that the match was all square after Ofori netted again. Both teams went for a winner in an end to end latter part of the game but neither could fine one, meaning the points were shared. Manor do climb above Clapton into fourth bottom on goal difference, whilst Hadley stay fourth but fall further behind the top three, which is now an eight-point gap to third.

Hosts Sporting Bengal saw Freddy Tandon net a last-minute winner as they defeated Enfield at Mile End Stadium. The hosts led 1-0 at the break thanks to a Mauricio Rimcon strike in the 20th minute, but the visitors levelled in the 64th minute through Michael Salako. Tandon though produced a great finish in the final minute to win the game for the hosts which takes them into 10th, whilst Enfield slip to second-bottom.

The Airportmen made it nine straight wins after a Moses Calvalho header five minutes from time gave them all three points at The Rec against St Margaretsbury. Carvalho headed home at the back-post to hand his side the win, meaning they go back into 6th and are now just four points off 5th-placed rivals Takeley, whilst St Mags slip to 13th.