Robert Halfon: Auschwitz teaches us not to hate Germans 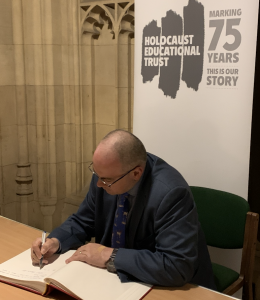 Auschwitz teaches us not to hate Germans

This article was first written and published in 2013

ONE of the most shameful things I remember doing as a very young child, was to be rude to a German lady who was a Secretary to a physiotherapist I had to see a number of times a week (due to problems walking). This lady had been nothing but kind to me, and had always made jokes and sometimes even given me sweets. So why did I behave in the way that I did? It was all because I had watched a series about the Nazi Holocaust on television. Suddenly the German adult who had befriended me, became an enemy who I started to hate.

Only last week, I thought of this episode in my life as I travelled to Auschwitz with the Holocaust Educational Trust and a whole plane-full of young students from the East of England. Harlow was well represented, with two students from Harlow College and two from St Marks academy. Arriving at the Airport at 05:00 am, for a one day visit, we travelled to Krakow in Poland, first to see a restored Jewish Cemetery and then to the Auschwitz Camps I and II (II being the notorious Auschwitz Birkenau).

In a strange kind of way, this visit for me was like a ‘reverse pilgrimage’ – being able to see the extreme opposite of everything you believe that is good, kind and decent. A trip to Hell if you like, to understand evil at its very worst. 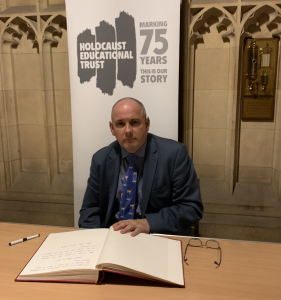 As a Jewish person, who had relatives in another concentration camp (Bergen Belsen), I have grown up with the Holocaust always in my cultural background. I have read about it, watched films about it, heard about it, visited the Holocaust Museum in Israel, known as Yad Vashem, on a number of occasions. I have never escaped it, in that it always remains – lurking in the background of my consciousness – and playing a formative part in my political makeup. So, in a strange way, going to Auschwitz represented a kind of relief, knowing that by visiting perhaps the most horrific place on earth, I would be able to slay some demons of my own and perhaps bring some kind of closure to angry thoughts and feelings that I sometimes have.

Seeing the Cemetery just outside Auschwitz that had been destroyed by the Nazis, was a cultural reminder of just how much Jewish life in Eastern Europe had been vanquished. In towns across Poland, Judaism had been vibrant – until the Nazis. To walk round this Cemetery – seeing Headstones restored after the Second World War was a miracle in itself. It prepared us for what was to come.

Auschwitz I is where the devil’s sign ‘Arbeit Nacht Frei’ (Work makes you free) is. As we walked around and went into the huts, where artefacts were displayed, you got a sense that the Nazis ran it as if it were a series of conveyer belts in a factory. Prisoners arrived, had their possessions taken away, their hair cut, and then many were sent to the gas chambers. In one hut we saw rooms full of human hair that the Nazis used to make textiles from, rows of suitcases, piles of spectacles, even hundreds of orthotics (false legs and arms) that were seized. Then you come out of the huts, walk close to a gas chamber and you have another shock. Right opposite is the House of the Commandant Rudolf Hoess. A nice house that would have fitted well into a Suburban Setting. Hard to believe that this man, lived there with his family, in this pleasant home, whilst murder and killing was going on. The organisation of the camp was extraordinary. With all morality gone, evil had become a science.

It was a very cold day when we visited Auschwitz, between -3 to -5 degrees, and snowing constantly. But, when we arrived at Auschwitz Birkenau, I felt a much deeper chill, right inside. I shuddered as if I had had a fright. This was the place where the Nazis killed 1.5 million Jews.

We stopped at the gates and walked up a few flights of stairs of the first Watchtower. You could see the whole vastness of Birkenau in front of you. The railway track that led into the camp. The platform covered in snow. Many long huts to the right and left. Coming down from the Watchtower, we went into the Latrine hut. This was the most sought after place for the prisoners to work: It was warm and they could have conversations with each other without interference from the Guards, who never went near the latrines, because of germs and disease. The second hut was where the prisoners were ‘accommodated’. Originally stables, each hut had around 1700 prisoners or more. Rows of diagonal type bunk beds on top of each other. Prisoners lay on these beds, only able to lie on their side. Many of us have often seen the pictures of these things, but it is hard to imagine what it is like seeing all these things in reality.

Strangely for me, the part of Birkenau that had most effect on me, was standing on the railway platform. The Nazis had ensure that the ‘trains ran on time’ to Auschwitz, from almost every destination in Europe. From Corfu to the Netherlands, Jews were squashed in cattle trucks without food or water, taken to this Auschwitz railway platform. When they got out of the train, they were put in ‘selection’. The fitter, healthier looking ones became prisoners for slave labour, the others taken to the gas chambers – told they were going to have showers. When they walked into the ‘shower huts’, gas came through the roofs. The dead bodies were then taken by other prisoners to giant ovens, where they were burnt. Some prisoners who were not selected for the gas chambers, were used for human experimentation instead.

I was on the railway platform for quite a while. It made me uncomfortable and melancholic because I thought about what had gone on before. Who had walked over the ground I was standing on. I started to think that I really wanted to leave this awful place and get home. But there was more to see, particularly the Memorial at the very end of the camp. Whilst we were there, I heard the sounds of dogs barking in the woods nearby – it was as if you could hear the Nazi SS dogs barking on the Platform.

Just before we left the camp, there was a special service by the Rabbi present. Some students read out poems, and then the Rabbi said a prayer and blew the Jewish Shofar (a rams’ horn). I thought to myself how incredible it was that Adolf Hitler had determined to kill every Jew – and managed six million, and yet here we were, at Auschwitz-Birkenau, listening to a Rabbi sounding a horn and saying a prayer. From the wretchedness of the the Holocaust to the rebirth and survival of the Jewish people.

If one thing Auschwitz teaches you it is not to hate Germans, or anyone else for that matter. If not checked, hatred grows and grows. From demonisation, to marginalisation, to extermination: that is the story of genocide – not just during the Second World War, but the world over. That is why I know I was so stupid in my behaviour to that German Lady as a child and why I have learnt my lesson ever since. We can’t visit the sins of the fathers on the sins of the children. We must learn from the past but not live in it.

One Response to "Robert Halfon: Auschwitz teaches us not to hate Germans"