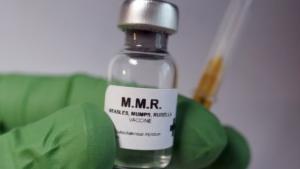 HEALTH officials are urging people to have both parts of the MMR vaccine after cases of mumps in England reached their highest level in a decade reports the BBC.

Outbreaks in universities and colleges raised the number of cases of the painful viral illness to 5,042 in 2019 – four times the number in 2018.

Most were in young adults who missed out on the MMR jab.

Public Health England said the full two doses of the vaccination were needed to maximise protection.

The vaccine prevents most cases of mumps – but not all, and so some young people are still getting the illness.

There were also increases in mumps cases in Wales and Scotland in 2019.

Teenagers and young adults in colleges and universities are now the ones who tend to be affected – for several reasons.

Many of the 2019 cases were born in the late 1990s and early 2000s and missed out on the MMR vaccine when they were children.

Research by a disgraced UK doctor falsely linking the vaccine to autism undoubtedly had an impact on uptake.

Current students may also be too old to have been immunised or offered the MMR, or may only have had one dose of the vaccine and thus not be fully protected.

It is also possible the vaccine’s protection against mumps may have worn off.

Despite the recent rise in cases, mumps hasn’t just reappeared.

Before the MMR vaccine, eight out of 10 people developed it and most of them were children of school age.

At that time, there were five deaths a year from mumps, mainly due to encephalitis or swelling of the brain.

The illness then became relatively rare before returning in the 2000s.