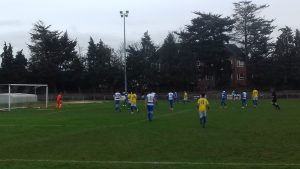 The Bricks returned to winning ways after a 2-0 home win over Cockfosters that saw them score both their goals in the opening half. There were a mere five minutes on the clock when Alfie Bartram opened the scoring and Solomon Ofori then notched a second in the 27th minute. The visitors did hit the cross bar soon afterwards, but the hosts held on to secure the three points which keeps them 4th. Cockfosters meanwhile end the day in 9th.

A solitary goal was all that was required for Hoddesdon to beat Redbridge at Lowfield with Thomas Cowell hitting the target in the 20th minute to secure the points which sees the Lilywhites occupy 7th-spot, one place and three points better off than Redbridge.

While the wind blew around Cricklefield for the whole ninety minutes meant that neither side were able to get to grips with the game. However the Woods had the better of the first half chances, whereas Ilford had more of the possession in the second half and looked particularly dangerous from set-pieces. The Foxes duly scored from a corner which was poked home by Chris Cordara-Soanes in the 88th minute to capture all three points for the hosts who move up to 10th after this result. Woodford Town meanwhile slip down to 12th.

The Bloods remain top of the table after a comprehensive victory over Sawbridgeworth Town that saw Ollie Fortune and Steven Carvell both notch braces. Fortune opened the scoring in the 20th minute, with Carvell then extending the lead on the half hour. Gavin Cockman made it 3-0 early in the second half, before Fortune and Carvell then added further goals to see them home and dry. While Saffron Walden are fighting up at the top of the table, spare a thought for the hosts who are now well adrift at the foot of the table and staring relegation full in the face with nine games to go.

Stansted hit Southend Manor for six however it was 1-1 at half-time as Moses Carvalho’s 4th minute goal was levelled by Harry Rogers just before the half hour mark. However the Airportment unleashed some serious fire power in the second half as Jordan Palmer, a brace from James Peagram (which were only a minute apart), plus goals from Connor Hammond and Paul Clayton saw them return to winning ways after suffering two back-to-back defeats in their last two league games. Stansted end the day in 5th, whereas Southend Manor sit down in 16th.

Stow move up to 2nd after a 3-0 away win at Takeley that saw all the goals coming in the opening 45 minutes. Vinny Murphy fired the visitors into a 3rd minute lead, then Dwade James and Callum Ibe hit the target before the half was out. With no further goals coming in the second half means that Stow are still heavily involved in the title picture, while Takeley drop down to 6th.

St Margaretsbury secured all the points at Mile End Stadium courtesy of an Ikem Odeh brace alongside an own goal. The win moves the visitors up to 15th, while Tower Hamlets now sit 17th.