BMAT student is camping out to raise money for NHS 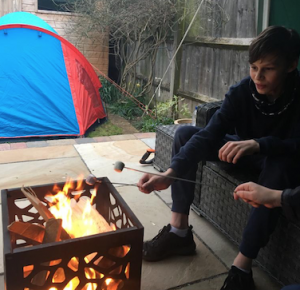 A FAN of the outdoors, teenager James Davis was not keen on being locked down.

Instead, he has spent the last month camping in his back garden – and has raised almost £1,000 for the NHS in the process.

The Year 8 student from Epping St John’s Church of England School, in Epping, is a keen member of the 3rd North Weald Scout Group and has enjoyed camping since the age of six.

He said: “I was really missing camping a lot, so I started camping in our back garden on April 1. I am still enjoying camping and love waking up to the birds tweeting away. The lockdown is quite hard as that is the only time I get to go outside.”

He had set himself a target of raising just £50 from his camp-a-thon, but instead raised more than £400 in the first week. After a month, donations have reached more than £900.

The 13-year-old said: “I did not think I would even raise £100. I am overwhelmed by people’s generosity.

“All I want is to be able to see my family and friends again and to camp with my scout group, so please stay home.”

Dad Chris has spent one night camping with his son, but the whole family – including mum Karen and eight-year-old brother Joshua – plan on spending May half-term camping in the garden together.

Proud mum Karen said: “James loves the outdoors. When he’s at school, he comes home and is straight out on his bike with his friends and just loves camping. He is not interested in gaming; he just wants to be outdoors.

“He has spent every night out there on his own. He takes a book out to read by torchlight and has cooked lunch out there. He is quite happy out there; it has helped his mental health. It is his little sanctuary.

“It was strange for us at first, going to bed knowing he was in the garden. I always check on the boys before bed, so have been saying goodnight to him out of the bathroom window!

“We go camping every year as a family for a weekend. To camp for a whole week would be quite tough, so what he is doing is amazing. I am really proud of James.”

Sponsor James, who plans to camp until the end of May, at https://www.justgiving.com/fundraising/karen-davis78