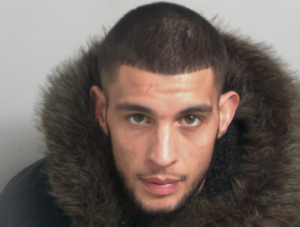 A MAN who injured a stranger and damaged his bike with a machete has been jailed.

The victim, a 14 year-old boy, had been cycling with a friend down Pennymead, Harlow at around 8.30pm on 8 February with a friend when a man ran at him and confronted him.

The man, 28 year-old Connor Shand, then produced a machete and swung it as the victim tried to get off his bike and hit the victim to the foot and also hit the bike.

Shand then walked off leaving the victim with a cut to his ankle and damage to his bike but was fortunately not seriously injured.

It was then reported Shand, of no fixed address, attended an address nearby making threats on the phone to another person.

He was arrested shortly after 9pm and later charged with GBH with intent, possession of an offensive weapon in a public place, criminal damage, and sending a letter, communication or article conveying a threatening message.

He admitted the offences of GBH , criminal damage and possession of an offensive weapon in a public place in March and, at Chelmsford Crown Court on 13 May, was jailed for two years and three months.

Investigating officer PC Craig Davey said: “This was an unprovoked attack which left two teenage boys terrified and could have led to the victim being seriously injured.

“Connor Shand is a dangerous individual who intimidated and threated a complete stranger.

“It’s extremely concerning that he appeared so comfortable threatening violence and carrying a weapon.

“Officers quickly responded to the incident and Shand was arrested within half an hour of it taking place.

“He now faces time in prison to contemplate his actions and the lasting impact they could have on those involved.”