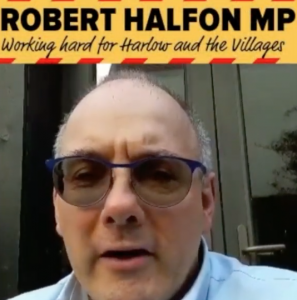 HARLOW MP Robert Halfon has accused his own government of planning to “euthanise” vulnerable MPs when parliament is ordered to return next month.

Ahead of a fierce clash in the Commons over the move, Robert Halfon attacked the decision to abandon online voting and participation in debates – even while most Covid-19 restrictions in place.

Mr Halfon spoke to Radio e on the issue.

It comes despite the opposition of Commons staff and other parties and after Sir Lindsay Hoyle, the speaker, threatened to block any attempt to force MPs to sit closer together.

Mr Halfon, the education committee chair, who has cerebral palsy, accused ministers of favouring MPs who are “Tarzan-like”.

“If there are MPs who are sick, shielding, or self-isolating, surely it is right to let them continue to vote online, and participate in committees also virtually via Zoom and Microsoft Teams,” he argued.

“Is it really morally just to say in effect to MPs, because you are not Tarzan-like and able to swing through the chamber, beating your chest, shouting to your constituents, ‘Look I am here!’ that you are effectively euthanised from the Commons?

“MPs who are disrupted by this awful pandemic are not just old horses to be sent to the knacker’s yard.”

The criticism comes after a claim that Jacob Rees-Mogg, the Commons leader, wanted to instal supermarket-style screens behind Boris Johnson to bypass social distancing rules in the chamber.

It will fuel a widespread belief that the real motivation for fast-tracking a full return of the Commons is to create a wall of noise – as the prime minister struggles in his weekly jousts with Keir Starmer.

Labour said ministers had “yet to provide an honest explanation as to why they want to bring this virtual system to an end”.

In an article for the ConservativeHome website, Mr Halfon told Mr Mogg: “Encourage MPs to return, absolutely. Go back to the traditions, once we are Covid-free.

“But don’t ignore those affected by coronavirus, who want to be legislators, when the technology makes this possible. Please be generous-spirited.”

MPs voted in favour of the business motion by 350 to 258 – effectively agreeing to the government’s plan not to continue the “virtual parliament” arrangements after the Whitsun break.

MPs and Commons staff can continue to work remotely, but from 2 June members themselves will have to travel to Westminster if they wish to take part in debates or votes – which SNP MPs have said they will not do.

Asking Mr Rees-Mogg for a statement on the guidance for MPs returning to work, shadow Commons leader Valerie Vaz said: “So the advice from the scientists is that lockdown should not be eased until track and trace is in place and that we look at the observed levels of infection and not just the fixed date.

“But does he agree that even the testing hasn’t been got right and that the government have extended it?

Mr Rees-Mogg replied: “The numbers of House staff expected back with MPs returning after Whitsun is not expected to change significantly from the number who are currently coming in to facilitate the hybrid Parliament.

“So the burden on our staff is not the burden, the burden is on us as Members of Parliament, and therefore I think it is one that we should undertake as we are like the rest of the country in these circumstances.”

He added: “I would finally like to reassure those members with underlying health conditions who have been told to shield or are receiving specific government advice about their health – we are working with the House authorities to see how they can continue to contribute to proceedings within the House.”

The government insists it need MPs at Westminster to remove the logjam on important legislation, such as the immigration bill.

It is feared that a traditional vote with 650 MPs taking part will take an hour to complete, with the queue for the lobbies stretching as long as 1.2km.

If six or seven divisions were called, MPs could spend their whole working day voting, the Prospect union warned.