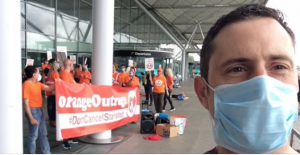 STAFF of easyJet threatened by job losses at Stansted Airport staged a demonstration on Friday.

The airline workers were protesting on Friday morning at plans to close the carrier’s base along with its operations at Southend and Newcastle airports.

In response to plans to cut 1,290 cabin crew jobs nationwide, 99.32% of 3,000 easyJet cabin crew who are members of the Unite union voted in favour of a no-confidence ballot in chief operating officer Peter Bellew.

Unite members are angry that while their jobs are under threat, easyJet paid £174 million in dividends to shareholders at the start of the Covid-19 crisis.

The company has also secured a Government-funded loan of £600m yet is pressing on with a cuts and closure programme.

Unite regional officer Lindsey Olliver said: “Since Mr Bellew’s arrival at easyJet our members have become increasingly concerned by his actions. They genuinely fear for the longevity and reputation of easyJet with Mr Bellew in his current position. The airline’s crew wear their uniforms with pride, but they’re losing faith in the company and feel undervalued and disrespected.

“During the pandemic easyJet has made liberal use of taxpayer-funded support through the job retention scheme and a £600m loan as well as paying £174m in shareholder dividends.

“These redundancies will cause misery, add to the economic upheaval the country is experiencing and hurt regional connectivity.

“EasyJet must halt these closures and redundancies, but the Government also has its part to play. It is absolutely essential that the job retention scheme is extended for the aviation sector, which has been one of the industries worst hit by the pandemic.

“The Government’s ongoing failure to provide such sector-specific support is resulting in huge job losses throughout the industry and is threatening the viability of airlines and airports alike. It is directly responsible for encouraging airlines to make drastic cuts as a permanent solution to a temporary problem.

“The aviation industry is essential to the future prosperity of the UK’s economy and it is vital that the Government steps up to the plate and provides specific support in line with other nations.”

At Stansted, easyJet accounted for 9% of flights before the Covid-19 lockdown. The airline’s workforce at the airport includes three employees and 335 cabin crew flying 27 routes, with up to 210 departures a week and 2.8 million passengers a year.

The airline, which predicts passenger numbers will not bounce back to 2019 levels until 2023, is expected to cut between 4,500 and 5,000 jobs across its European operation.

An airline spokesman said of the protest at Stansted: “easyJet is fully committed to working closely and constructively with Unite throughout the consultation process. We respect the right to a peaceful demonstration.

“We know this is a difficult time for our crew and are focused on working closely with the union in the interests of the long-term health of the company, our people and to protect jobs.”

In response to criticism of Mr Bellew, he said: “We call on BALPA to focus on working constructively with us rather than on personal attacks which are not in best interests of our employees.

“Peter has a wealth of industry experience having been COO (chief operating officer) for Ryanair and CEO (chief executive officer) for Malaysian, and sits on the EASA (European Union Aviation Safety Agency) strategy advisory board.”

The Labour candidate for Hertford and Stortford at the last general election, Chris Vince said: “EasyJet’s decision to close their base at Stansted Airport is extremely disappointing and I was proud to stand in solidarity with workers outside the airport terminal on Friday.

“I implore the company to reconsider which will not only have a massive negative effect on those staff who work there, including a number from Harlow, but also would be a huge dent on the local economy.

“At a time like this workers need security but thanks to this decision by EasyJet now face an uncertain future.”