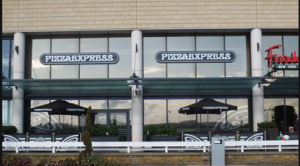 PIZZA Express is considering closing 67 of its UK restaurants, which would mean the loss of 1,100 jobs.

The chain is the latest High Street outlet to undertake a restructuring of its business after trading was halted by the coronavirus pandemic.

The news comes just a day after the government launched its Eat Out to Help Out plan to boost the restaurant trade.

There is a Pizza Express in the Water Gardens, Harlow.

Pizza Express would not say which of its 449 UK outlets were possible targets for closure.

It currently has 166 restaurants open, all of which are taking part in Chancellor Rishi Sunak’s £10 off meal deal.

All its UK outlets had been closed since lockdown began on 23 March. They began reopening in July when lockdown rules were eased.

Pizza Express said in Tuesday’s statement that customer demand had been “encouraging” at the restaurants which had reopened and that plans for further re-openings were well underway.

The company said restructuring the business would put it on a stronger financial footing in the new socially distanced environment.

If all 67 outlets are closed, that would mean the loss of 15% of its restaurants, but it said the final outcome was yet to be decided.